"It was supposed to be a place of peace, but history shows that the Hyrulian Sanctuary was once the site of a brutal battle. One of the oldest structures in the land, it was where Zelda went for help when she first escaped from Agahnim, and the Sage there offered her shelter."
— Nintendo Player's Guide

The Sanctuary is a recurring location in the The Legend of Zelda series.

The Sanctuary is a somewhat remote outpost, accessible via the Secret Passage through the sewers of Hyrule Castle. It is the home of an elderly sage who is loyal to Princess Zelda and the Royal Family of Hyrule. After Link rescues Zelda from imprisonment in the castle, she shows him the secret escape route, and they make their way to the Sanctuary. When they arrive, Link leaves her there, under the sage's protection, while he goes in search of the means to thwart Agahnim's plot.

Later in the game, Princess Zelda reaches out to Link telepathically for a second time, alerting him to trouble at the sanctuary. Link returns to find the Princess gone and the sage mortally wounded by the followers of Agahnim, who have taken Zelda back to the castle for the final portion of the wizard's ritual.

The ending credits of the game show the sanctuary restored to its former condition, and the sage along with it.

The Sanctuary reappears in the same location as A Link to the Past. It is home to Seres and her father. At the start of the game Link must track down the Captain to the Sanctuary. However before he arrives, Yuga appears and kidnaps Seres. Link is left outside but upon Dampé's suggestion, he takes the Forgotten Sword and enters the Sanctuary via the Secret Passage. He arrives too late and Yuga escapes with Seres after transforming the Captain into a picture.

Later in the game a portal to Lorule appears inside the Sanctuary.

As part of the A Link Between Worlds DLC, the Sanctuary appears on the Hyrule portion of the Lorule Adventure Map. 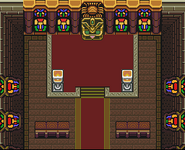 The interior of the Sanctuary from A Link to the Past
Add a photo to this gallery
Retrieved from "https://zelda.fandom.com/wiki/Sanctuary_(A_Link_to_the_Past/A_Link_Between_Worlds)?oldid=502999"
Community content is available under CC-BY-SA unless otherwise noted.