Zelda Wiki
Register
Don't have an account?
Sign In
Advertisement
in: Sanctuaries, Locations, Locations in A Link to the Past,
and 5 more

For other uses, see Sanctuary (Disambiguation). 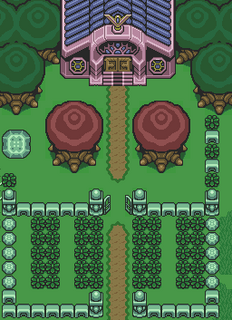 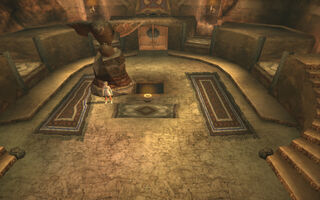 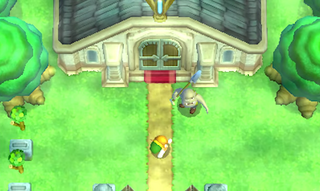 A Link to the Past
Twilight Princess
A Link Between Worlds

Sanctuaries are recurring locations in The Legend of Zelda series.[1][2][name reference needed]

The Sanctuary is the home of the Loyal Sage located north of Hyrule Castle. After Link rescues Princess Zelda from her prison in Hyrule Castle, he uses the Sewer Passageway to take her to the Sanctuary. She remains there with the Loyal Sage, hiding from Agahnim.[3] However, when the hero withdraws the Master Sword from its pedestal, the Sanctuary is attacked by soldiers.[4] When Link reaches the Sanctuary, he finds the wounded Loyal Sage lying on the ground. The sage informs the him that the princess was kidnapped and taken back to the castle so Agahnim could use her to open the Seven Sages' seal.[5]

The Sanctuary is last seen during the ending credits, showing that the Loyal Sage has fully recovered from his wounds.

The Sanctuary is located in Kakariko Village, northeast of Malo Mart and east of the graveyard. Renado lives here with his daughter, Luda. The children of Ordon Village, Colin, Talo, and Beth, take refuge here after being kidnapped by King Bulblin.

The Sanctuary consists of one round room with an effigy of the Light Spirit Eldin in the center. A small fire burns next to the statue. Four torches line the walls, each within an alcove. The sanctuary may seem small at first glance; however, it has a large cellar which can be accessed by lighting all the torches in the room. This causes the statue of Eldin to shift, revealing the entrance to the cellar.[6] At the far end of the cellar is a scaffolded shaft that leads up into the Kakariko Village Graveyard. Within the cellar there is also a large room blocked by an Owl Statue.

Link first visits the Sanctuary as a wolf while Kakariko Village is covered in Twilight, during his search for Eldin's Tears of Light. Here, he discovers that Renado has been taking care of the Ordon children all along, protecting them from the Shadow Beasts that prowl the village.[7] Later on in the game, Link returns to the Sanctuary, where Renado and Gor Coron tell Link how to retrieve Ilia's memory.[8] After the young hero obtains Ilia's Charm from Impaz in the Hidden Village, Link must show it to Ilia at the Sanctuary, where she will recover her memory and thus give Link the Horse Call.

Shad can also be found in the cellar after Link completes the Temple of Time. Once the young hero obtains the Ancient Sky Book from Impaz, he must show it to Shad, who will read it and cause for the Dominion Rod to reactivate.[9] When Link obtains the missing Sky Characters and completes the Ancient Sky Book, Shad will able to read it fully, thus permitting Link to move the Owl Statue. Doing so reveals the secret room in the Sanctuary's cellar.[10] It is here that the broken Sky Cannon can be found, which Link must warp to Lake Hylia for Fyer to fix.[11]

In Lorule, the Sanctuary is replaced by a cave containing Master Ore. It is inhabited by the Philosopher. Since the Sanctuary is not reachable from other Fissures to Lorule, Link must use the Fissure located inside the Hyrulean Sanctuary to reach the cave in Lorule. In order to access the Treasure Chest containing the Master Ore, Link must navigate a passage similar to the one found in Hyrule. At the end of the passage, Link enters the cave on a ledge and must merge on the wall to reach the Ore.

In the A Link to the Past comic by Shotaro Ishinomori, Link and Princess Zelda reach the Sanctuary after escaping Hyrule Castle through the Sewer Passage. Upon reaching the Sanctuary, the Old Man living there explains the consequences of Agahnim's plan.[15] However, Agahnim suddenly appears and commands that Zelda return to the castle.[16] Although Link steps in to protect the princess, the wizard easily defeats him when the hero tries to attack him. As he takes Zelda away, she reveals to Link that only the Master Sword can harm Agahnim.[17] The hero then rushes out of the Sanctuary to find the legendary Sword.[18]

In the Japanese version of A Link to the Past, the Sanctuary is named 教会 (Church). Nintendo of America changed it to Sanctuary in accordance with its policy on religious content.[citation needed] Nintendo of Europe mostly followed suit for its localizations, with the exception of the German one, which uses the term Kathedrale (Cathedral).