Zelda Wiki
Register
Don't have an account?
Sign In
Advertisement
in: Hylians, Characters, Characters in The Wind Waker,
and 3 more 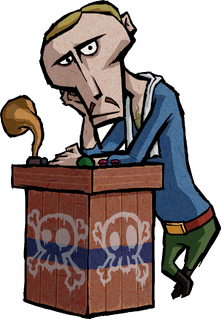 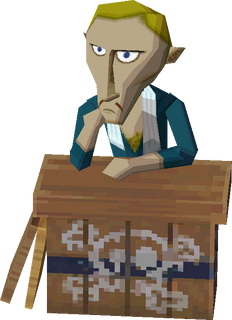 Salvatore is a recurring character in The Legend of Zelda series.[3]

In The Wind Waker, Salvatore runs the Squid-Hunt minigame inside the lighthouse on Windfall Island, and also the Barrel Shoot minigame on Spectacle Isle. To fit in with the pirate-theme of his games, he introduces them with a routine in which he pretends to be Tetra or a fearsome pirate captain, using wooden cutouts which he pokes his face through, and putting on a pirate voice. Aside from when he's using the wooden cut-out pictures, he is very unenthusiastic about the job and always seems bored.

Salvatore appears again in Phantom Hourglass. He runs a cannon minigame on Bannan Island and behaves similar to his first appearance in The Wind Waker.

Salvatore also appears as a Trophy and Sticker in Super Smash Bros. Brawl.

Salvatore's name could be a reference to the famous Spanish painter Salvador Dalí, which would match his use of wooden cut-out paintings during the introduction of his games. "Salvatore" is a common name in Italy, and this is probably the reason why his name was changed only in the Italian language. The Italian name Arraffaele comes from the word "arraffare," which means "to seize" or "to steal", and another common Italian name, Raffaele.