Not to be confused with Subrosians. 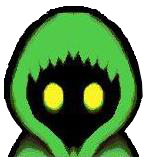 Salona run their "Bodyguard Salons" on many different islands. The salons are where Tingle's various Bodyguards can be found to take with him into dungeons. One sidequest involves a Salona who has lost its robe, and is using a barrel as clothing instead until Tingle can find a new Robe.

One of the Salona reveals to Tingle that long ago an ancient demon enslaved the world. When a Hero appeared, he gathered together a band of brave men and defeated the demon, restoring peace to the world. These brave men were the ancestors of the Salona, and ever since that time, they ran Bodyguard Salons.

Because of their involvement with the Hero, the demon placed a curse upon the brave men and their future descendants. Since they acted as the shadow of the Hero, they were cursed to live as shadows, fearing the sun. When exposed to the sun, they would turn to dust. Ever since then, the Salona have worn hoods to protect themselves from the sun.

Races in The Legend of Zelda series
Community content is available under GNU Free Documentation License unless otherwise noted.
Advertisement