Zelda Wiki
Register
Don't have an account?
Sign In
Advertisement
in: Towns, Locations, Locations in The Wand of Gamelon 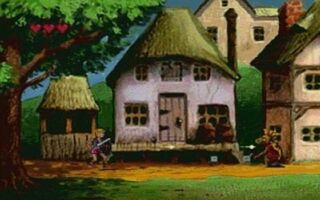 Sakado (pronounced /səˈkɑːdoʊ/ sə-KAH-doh)[1][2] is a location in The Wand of Gamelon.[3] Along with Aru Ainu and Kobitan, it is one of the game's starting stages.

Sakado is a port town settled close to Gamelon's lagoon. It is the largest town on the island, with several cottage houses built along its streets. It is divided into two sectors; a main street where the town's entrance is, and a back alley, where the town's port and church are located. When Zelda first arrives to the island, Sakado has been taken over by Gibdo, and its residents captured and taken to Tykogi Tower,[4][5] leaving only the Merchant and Lika as the remaining residents and Dairas and Arpagos patrolling the streets. Most of the buildings in town have since been abandoned, and a few locked.

At the entrance of the town is Sakado's General Shop, where Zelda can purchase Bombs, Rope and Lantern Oil from the Merchant. His shop also has a Triforce Map, which will take Zelda back to the world map screen. The second building following it is a darkly lit house inhabited by Keese and Moblin Spearthrowers, and houses the Power Sword in its attic. The third building is Harbanno's bakery, which is at first locked and later accessible after Harbanno is freed from Tykogi Tower. He will supply Zelda with free Bread whenever she visits him. The final building at the end of the main street is Lika's house, where she can be seen sewing a Cloak that she gives to Zelda. She offers to turn it into a Magic Cloak if Zelda brings her some Fairy Dust.

The back alley can be reached by passing through the window in Lika's house. Close to the port's pier is a boat warehouse with boarded windows where Impa is staying. She reveals by looking through the Triforce of Wisdom that Zelda's father, King Harkinian, was captured and Link involved in a terrible fight, but whose fate is ultimately unknown. The building next to Lika's house is Mayor Cravendish's house, indicated by a small portrait of himself inside. The house connects to a tall, crumbling tower now home to a flock of Arpagos. An Arpagos Egg can be found in a large nest at the top. At the end of the back alley is the town's church, graveyard and smithy. The smithy is initially locked until Zelda rescues Yokan the fisherman in Ahitaru. He moves to Sakado afterward where he finds work as the town blacksmith, and will offer to temper Zelda's Power Sword into a stronger form if she brings him a Heat Crystal.

The town graveyard is accessed through a small crypt near the church. A small, Bomb-able wall blocks the rest of the graveyard, where Ghinis and Stalfos infest the grounds. Zelda finds a Key at the end of the graveyard that opens the church doors. There she finds Gibdo inside the church, who is using it as his base of operations. As with the graveyard, it is also heavily infested with the undead. The church is a tall building with very little lighting and rafters supporting its structure, requiring that Zelda brings a Lantern to light her way and Rope to climb the rafters. Zelda confronts Gibdo at the top wooden beam. Upon his defeat, a Triforce Map appears and Washubi Swamp is unlocked.