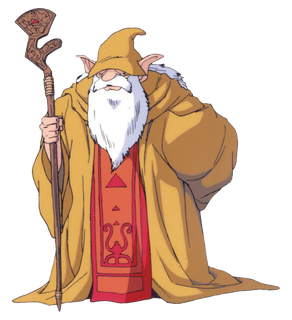 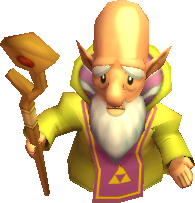 Era of Light and Dark(ALttP)

Sahasrahla is a recurring character in The Legend of Zelda series.[2]

Sahasrahla is the elder of Kakariko Village in A Link to the Past.[4] As a descendant of the Seven Wise Men,[5] Sahasrahla is gifted with mystical abilities, boasting telepathic powers like those of Princess Zelda. He is able to use these abilities to contact Link over great distances, even across the void between worlds.[6] A man named Aginah who hides out in the in the Desert of Mystery is revealed to be his brother in Ancient Stone Tablets, and shares these abilities.

Sahasrahla was forced into hiding because of the growing threats of Agahnim,[1] as he is said to be a descendant of one of the original Seven Sages that Agahnim is looking for. Fortunately Sahasrahla's Grandson knows that Sahasrahla is hiding near the Eastern Palace.[7] The boy marks his location on Link's map, and he must seek him in order to acquire more information. The elder is found in a small shrine-like building a short distance to the west of the Eastern Palace itself, known as Saharahla's Hideout. It is here that he meets Link. He will ask Link to obtain the Pendant of Courage, one of the three Pendants of Virtue required to wield the Master Sword from the Eastern Palace as a trial of his courage. Once completed, he offers to tell Link more about the Master Sword and reward him with an artifact.[8] If Link brings him the Pendant of Courage, he will be told how a hero is said to appear from the bloodline of those who guarded the Pendant, the Knights of Hyrule. Believing Link to be this hero, Sahasrahla entrusts him with the Pegasus Boots, which had been passed down by the families of the Seven Wise Men.[9]

Asking Link to obtain the remaining Pendants, he will continue to offer his advice to Link via telepathy. He will usually only contact Link through the power of a Telepathy Tile,[10] but is also able to contact him at other moments, usually at times of great need. Unable to offer his own strength, he wishes nothing more than for Link to succeed in his quest.[11]

After Ganon has been defeated, Sahasrahla returns to his home in Kakariko Village.

When Link meets Sahasrahla in A Link Between Worlds, he tells the hero about Ganon's attempt to destroy the land of Hyrule a long time ago.[12] After learning that a man named Yuga turned Seres into a Painting, he tells Link that she was one of the Seven Sages, descended from the original group of Sages who imprisoned Ganon in the Dark World. He then remembers that his pupil, Osfala, is another sage, and that he went to the Eastern Palace. Knowing that he is too old to reach the palace in time, Sahasrahla asks Link to go ahead of him and warn Osfala. However, Link fails to protect Osfala from Yuga, and meets Sahasrahla once more, outside of the Eastern Palace. They are interrupted by an earthquake originating from Hyrule Castle and hurry along there, only to realize that it is now protected by an evil Barrier, set up by Yuga to secure control over Sage Impa and Princess Zelda. Sahasrahla laments over the Pendant of Courage being inside the Castle, which he explains is necessary for obtaining the Master Sword, which can dispel the Barrier. Link reveals that Princess Zelda gave him the Pendant of Courage prior to sending him to Sahasrahla's side. Sahasrahla then tells the young hero that the remaining two Pendants of Virtue are located in the House of Gales and Tower of Hera, and marks Link's map to show both locations.

Sahasrahla appears outside Link's house after the young hero returns from Lorule. He explains that fissures between the two worlds have appeared as a result of Yuga's influence,[18] but assures Link that there is still hope as long as he wields the Master Sword.[19] He then tells Link that a fissure has appeared behind his house in Kakariko Village,[20] hinting that Link can enter a previously unreachable segment of Lorule through it.

His relation to Sahasrahla from A Link to the Past is not confirmed, but he may be a direct descendant.[21] If this is indeed the case, he too would carry on the bloodline of the Seven Sages.

Much like in the game, Sahasrahla in the A Link to the Past comic by Shotaro Ishinomori aids Link heavily throughout the young hero's journey to retrieve the Master Sword and save Princess Zelda as well as Hyrule. Sahasrahla possesses telepathic abilities that he uses to communicate and give advice to Link to defeat enemies or give the location of the next Pendant of Virtue.[22]

Sahasrahla is first introduced when the Loyal Sage sends Link to find Sahasrahla, a descendant of the Wise Men who knows more about the location of the Master Sword.[23] Link finds Sahasrahla's house in Kakariko Village in the care of his Wife, but she tells him that Sahasrahla left when he found out that Agahnim was responsible for the missing maidens and does not know where he has gone to.[24] Eventually, Link learns from a boy who was asked to watch over Sahasrahla's wife that Sahasrahla is in the Eastern Palace. There, he finds the descendant of the wise men, and although Sahasrahla is puzzled as to how someone so young like Link could be searching for the Master Sword,[25] he tells Link he must recover the Pendants of Virtue to claim the legendary weapon. Sahasrahla then gives the Pendant of Courage to Link and sends him on his way to retrieve the two remaining pendants.[26]

When Link arrives to the Desert of Mystery, he is guided by Sahasrahla's telepathy to the next Pendant of Virtue atop Death Mountain.[27] Sahasrahla also warns the young hero to not step into the Dark World Portals that appear throughout the desert, for he might turn into a beast forever.[28] After the young hero retrieves the Master Sword from the Lost Woods and heads to Hyrule Castle to fight against Agahnim, Sahasrahla advices Link to not strike the wizard directly with the sword and instead use it to repel Agahnim's own magic back at him, allowing the young hero to defeat the evil wizard.[29]

Sahasrahla does not appear again until Link uses the Comfork to communicate with him in the Light World, where Sahasrahla explains to him that the Dark World is a mirror of the Hyrule Link knows.[30] Sahasrahla is last seen in the comic as he helps Link to open up the entrance to the Swamp Palace to rescue one of the Maidens.

Sahasrahla may be named after the seventh chakra of Hinduism, Sahasrara.