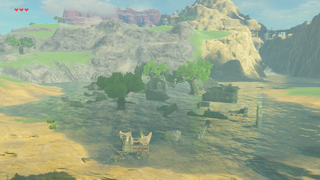 The Sage Temple Ruins is a location in Breath of the Wild.[1]

The Sage Temple Ruins are the half-sunken remains of the Sage Temple located along the Regencia River in Hyrule Field. Scattered around the Ruins are a number of Barrels, in which Link can find Hylian Shrooms and Apples. Two broken wagons can be found in the Ruins, which can be searched for Materials. Floating right in the northwestern corner of the area is a Raft.

A Korok can be found underneath a Rock atop a broken wall in the center of the Ruins.