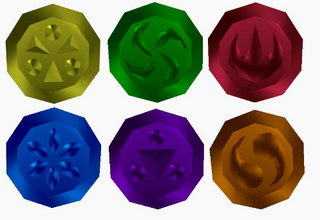 The six Medallions from Ocarina of Time

Please improve it as you see fit. Editing help is available.
This article has been flagged since June, 2020.

The Sage Medallions represent the awakening and power of their respective Sages. Link obtains each of them after awakening a new Sage, whose powers are symbolically added to those of Link. Each Sage Medallion bears the emblem and color of its respective element, and has the Triforce emblazoned on its back.

Modified versions of the fire and water emblems appear underneath Koume and Kotake when they manifest before Link in the Spirit Temple. The fire symbol faces to the left rather than the right, while the water symbol has eight points rather than six.

During the early development stages of Ocarina of Time, Nintendo intended that the Medallions could be used by Link. Several early screenshots depict Link with the Forest Medallion (then known as the Wind Medallion) equipped, as the Medallions were the original method of warping through Hyrule instead of using the Ocarina of Time.[4]

In a November 1997 interview by Famimaga 64, Shigeru Miyamoto explained that the Medallions, known as "Magic Medallions", were supposed to have been used in conjunction with Link's Bow and Arrow.[5] There were to be six types of Magic Medallions, including fire, wind, darkness, and light, meaning that they might have been used instead of the Fire, Ice, and Light Arrows that turned out in the final, released version of the game.[5]

The Forest Medallion and Water Medallion were originally the "Wind Medallion" and "Ice Medallion," but their names and corresponding dungeons were changed during development.[3] Two icons relating to these original medallions are still present in the game's code.[6]

Remnants of these original themes are present in the released version of Ocarina of Time, such as Saria's part in Ganon's Castle being wind-themed, Ruto's part in Ganon's Castle being ice-themed, and the presence of an Ice-themed mini-dungeon. Also, the symbols on the Medallions were never changed; the Forest Medallion has an image similar to a wind-like vortex on it while the Water Medallion bears the image of a snowflake.