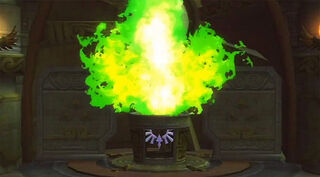 Empowering the Goddess Sword
The three Sacred Flames are sacred relics used to enhance the powers of the Goddess Sword in Skyward Sword.[1] They are manifestations of the Force, the sacred power that dwells in all living beings.[2][3]

After Link helps Zelda and Impa escape from Ghirahim at the Temple of Time, he returns to the Sealed Grounds and is told by the Old Woman there that there is a second Gate of Time in the Sealed Temple that can be activated with a Skyward Strike.[4][5] However, Link must first temper the Goddess Sword with the Sacred Flames to give it enough power to open the Gate.[6][7] To do this, Link must conquer three Silent Realm trials and acquire the Goddess's treasures.[8] Each of the Sacred Flames is named after one of the Golden Goddesses, and they each enhance Link's Sword in a different way. After obtaining each of the three Sacred Flames, the Goddess Sword transforms into the Master Sword. After fighting off The Imprisoned in the Sealed Grounds a second time, Link travels through the Gate of Time in the Sealed Temple to the distant past to reunite with Zelda. As the reincarnation of the Goddess Hylia, Zelda grants the Master Sword a final blessing, transforming it into the True Master Sword, a blade capable of smiting evil which only Link can wield.[9]

Farore's Flame lies deep within the Ancient Cistern. It lengthens the Goddess Sword, giving it extended reach and twice its original strength.[10] It is rechristened the "Goddess Longsword."

Nayru's Flame is housed within the Sandship,[11] which was once protected and helmed by Skipper before pirates stole it.[12] It enhances the dowsing abilities of the Goddess Sword, allowing Fi to search for Rupees, Treasures, Gratitude Crystals, and Goddess Cubes.[13] It is rechristened the "Goddess White Sword."

Din's Flame hides deep within the Fire Sanctuary.[14] It fills the Goddess Sword with a sacred light, giving it three times its original strength, and the power to repel evil.[15] After this final tempering, the Sword is transformed into the Master Sword.[16]