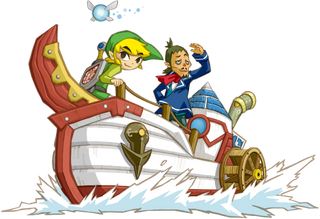 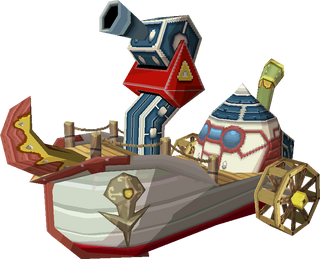 The SS Linebeck,(PH)[1] also known as S.S. Linebecks,(HWL | HWDE)[2] are recurring Items and vehicles in The Legend of Zelda series.[name reference needed]

After Link rescues Linebeck from the Temple of the Ocean King and meets him back at his ship, Oshus arrives and tells the young hero that he should go to the Isle of Ember and talk to Astrid for clues on how to find the Ghost Ship. Linebeck agrees to go with both Link and Ciela on their quest to travel around the World of the Ocean King and rescue Tetra.

The SS Linebeck is controlled by drawing its path on the bottom screen of the Nintendo DS. While out on the sea, there will be an arrow at the bottom of the screen which can be pressed to make the ship jump and evade Sea Traps. The side of the touch screen has a gear with the words "Go" and "Stop" to halt the ship if necessary. When Link buys the Cannon from Eddo, it will be immediately installed onto the ship, where Link will have an infinite amount of Bombs to destroy enemies out on the sea by just tapping the monster. Eventually the Salvage Arm will also get installed on the ship to obtain treasure from deep beneath the waves.

When at sea, the ship's endurance meter appears as a green Life Gauge on the top screen. If the ship runs out of hearts, it will be a Game Over. Docking the ship replenishes any hearts lost during travels. The Salvage Arm, however, must be repaired by Gazpacho in the Shipyard on Mercay Island. The ship can also be customized with different Ship Parts by talking to Gazpacho.

In order to dock on an island, the ship's destination must be drawn and touch the anchor symbol that is situated next to the island. Once done so, the ship will automatically follow the path drawn and land on the island as it is nearing to it.

During the battle with Bellum, the SS Linebeck gets completely destroyed after Link and Linebeck defeat the Ghost Ship. Once the Oshus returns to his original form, Linebeck, instead of asking for treasure, asks for his ship to be restored. The SS Linebeck is last seen during the game's ending when Link watches it sailing away without any visible damages.

The SS Linebeck consists of eight different Ship Parts that can each be customized: Prow, Anchor, Hull, Cannon, Handrail, Bridge, Chimney and Wheel. The Salvage Arm cannot be changed. New Ship Parts can be purchased from Shops, collected from Treasure Chests found in Dungeons or with Treasure Charts, won in Mini-Games, or traded with other players using Freedle's boxes. Link can then attach these Ship Parts to the SS Linebeck as he pleases by speaking to Gazpacho in the Shipyard on Mercay Island.[3] By using multiple Ship Parts from the same set(s), the SS Linebeck's durability can be increased.[4]

The SS Linebeck consists of the following Ship Parts by default:

In the Phantom Hourglass manga by Akira Himekawa, the SS Linebeck makes its first appearance after Ciela assumes that Linebeck's ship is not seaworthy.[5] Link is stunned to see the ship and claims that it is awesome.[6] Linebeck says that it is because the vessel is his ship.[7] Onboard, Linebeck has Link do chores such as swabbing the ship's deck to pay for his transportation.[8] After the ship sails to the Isle of Ember and Leaf is freed, it is attacked by a Flying Fish.[9] Due to Linebeck's cowardice, the SS Linebeck does not have any weaponry,[10][11] thereby Link decides to get a Cannon for the ship on Cannon Island. Eventually a Cannon is built on the ship and it continues the voyage.

Later on, a water sprout whisks the SS Linebeck to the Ghost Ship,[12][13] where it is surrounded by a thick fog.[14] The ship lands on the Isle of Gust,[15] and is then steered toward Molida Island afterwards in order to rescue a girl who was taken by Cyclok.[16] Upon hearing Tetra's voice, Ciela and the other two Spirits set the ship's course for the Ghost Ship.[17] After an encounter with one of the Cubus Sisters and a conversation with Oshus, the ship's crew sets sail to find the blacksmith Zauz in order to defeat Bellum.[18] Despite their efforts, the SS Linebeck is attacked and boarded by the pirate girl Jolene.[19][20] Jolene reveals that Linebeck once saved her from a monster by ramming his ship in its side.[21] Linebeck had panicked and was attempting to sail in the other direction, accidentally sailing into the monster by mistake.[22]

Link uses the SS Linebeck to travel back to Mercay Island in order to save Linebeck from Bellum. Before the Temple of the Ocean King collapses on them, Oshus, who is really the Ocean King, pulls the reunited group back to the ship.[23] To help Link battle against Bellum, the nearly freed Tetra takes command of the SS Linebeck and aims the Cannon at the demon's eye.[24] During the battle one of Bellum's tentacles smashes the ship's prow,[25] yet it manages to survive the battle. The ship drifts on the now calm ocean after Bellum's defeat. Aboard the vessel, Linebeck makes his wish as Link and Tetra are returned to their world.[26] The SS Linebeck is shown a final time in Hyrule with Linebeck blowing its steam whistle, causing Link to realize Linebeck had not wished for treasure after all.[27]

S.S. Linebecks can be obtained either by purchasing them from the Item Card Shop for 20,000 Rupees, or by getting one as a battle reward. Because the Grand Travels Map is split between Spirit Tracks and Phantom Hourglass-based sections, S.S. Linebecks only appear as victory rewards of battles to the right on the pink dividing line. When a S.S. Linebeck is used, every battle across the Grand Travels Map will have less of a KO requirement for certain battle ranks, which makes it easier for Warriors to achieve higher ranks for less kills.[2][31] The Captain Power provided by the S.S. Linebeck runs for three battles.