Zelda Wiki
Register
Don't have an account?
Sign In
Advertisement
in: Locations in The Adventure of Link, Towns, Locations,
and 2 more 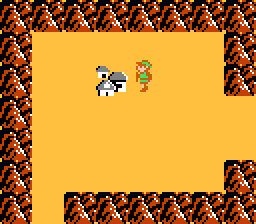 The Crystal Trap
The Shadow Prince

Ruto Town,(TAoL)[1] also known as the Town of Ruto,(TAoL)[2] is a recurring location in The Legend of Zelda series.

Ruto Town is located in a mountainous region of northwestern Hyrule in The Adventure of Link.

The townsfolk of Ruto give helpful advice to Link, such as warning him to not go south without a Candle,[4] as well as giving him clues about the whereabouts of the powerful Hammer.[5] It is also here that Link meets Error, who tells him about a hidden tunnel near the Mido Town[6] after Link meets a man there.[7]

In The Crystal Trap, the town of Ruto plays an important role in the book since it is the location of the Handprint, one of the three items that Princess Zelda requires to free Link from the Crystal, as dictated by the Fairy's Scroll.

Ruto Town is first introduced in the book after Zelda obtains the Magnifying Glass from a nearby Cavern. When Princess Zelda arrives at the gates of Ruto, a gatekeeper known as Aldo recognizes the princess and informs her that she's arrived at Ruto. The princess sits down to rest and tells Aldo about her quest, asking the gatekeeper if he's see anything or anyone unusual around town. Aldo tells her about a newcomer known as Conly, a beekeeper, who lives on the outskirts of town.[8] Since the beekeeper is known as unfriendly, Aldo advices the princess to not go near him until she finds a way to deal with him.[9]

Following Aldo's advice, Zelda chooses to go out into the main street of Ruto. It is at this point that Zelda can choose to go to three locations: the Dark Tower, the Tavern and the Fortune-Teller's hut. If Zelda goes to the Fortune-Teller and follows her deeper into the hut, the Fortune-Teller will reveal herself to be a Wizzrobe, where the princess will meet her doom at the hands of the Wizzrobe and a gang of Moblins.[10] By going into the Dark Tower, Zelda will be promptly attacked by a Darknut but will eventually find the Handprint at the top of the tower.[11][12] Lastly, entering the Tavern will lead the princess to meet with her old mentor Estragon, who will give her the Fairy Flower Sap, an item necessary to receive the Magic Honey from Conly the beekeeper.[13]

Ruto is briefly mentioned in The Shadow Prince. As Link is making his way to Saria Town to obtain the Mirror of Truth, he begins to think whether he should really take the path through the Midoro Swamp. He then mentions that he could take a safer but longer route by going through Ruto Town.[14] If the young hero chooses to take the Ruto detour, an Old Man will appear in front of him just as he is about to reach the town. The Old Man will give a key to Link and will advise him to not go through the Town of Ruto since there is a "terrible traffic jam" in there.[15]

The Japanese kanji Ru means "to stay", while To means "capital city". [16]