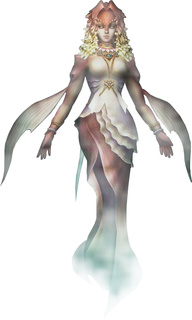 Rutela is a character in Twilight Princess.[2] She was the queen and elder of the Zoras residing in Zora's Domain.[3]

Rutela was the wife of the late King Zora and mother to Ralis.[4][5][6] During the events of Twilight Princess, Shadow Beasts raid the Zora village, forcing the queen to quickly send her son to Hyrule Castle to inform Princess Zelda of what had occurred.[5] However, before Prince Ralis could return, the Shadow Beasts executed Rutela in front of the other Zoras.[7]

She first appears soon after Link and Midna thaw Zora's Domain with the Molten Shard. Just as they are departing from the throne room, Rutela appears and thanks them for saving her village and her people.[8] She tells them the tale of her unfortunate fate and mentions that she senses Prince Ralis's presence growing fainter over time.[9] She states that although she would give her life for his, she can no longer risk anything for his sake now that she is deceased.[10] She asks Link to save Prince Ralis, promising to give him the Zora Armor in return.[6]

After Link brings Prince Ralis to Kakariko Village to be healed, Rutela appears to him once again just outside of the Sanctuary. She leads him to the hidden grave just behind the Kakariko Village Graveyard where King Zora, the creator of the Zora Armor,[11][12] lies in eternal slumber.[4] There, she thanks Link for saving her son in his time of need.[13] Honoring her earlier promise to Link, she bestows the Zora Armor upon him.[14]

Afterwards, Rutela says that she will now be able to join the king in his slumber and asks Link to tell her son that she loves him without end.[15][16] She also says that Prince Ralis should not grieve his mother's death, for she wants him to be brave and live on as the king of the Zoras.[17] Later, Prince Ralis mentions to Link that Rutela appeared to him in a dream and showed him Link's image, telling him that he was the one who would save Zora's Domain and steer his destiny.[1]

During the ending credits, Rutela is seen watching over her son in Zora's Domain.

The prefix Rut- in Rutela's name is most likely a reference to Princess Ruto.