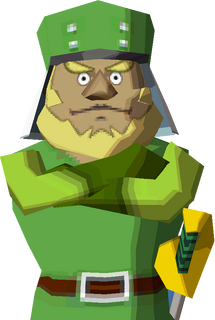 Russell is a character in Spirit Tracks.[3] He is the captain of the Hyrule Castle guards.

Captain Russell resides in the training room within the castle, where Link visits him to receive the Recruit's Sword and thus be able to access the Tower of Spirits via an underground passage.[1]

Later on, after completing the Snow Temple, Link will receive a letter from Russell inviting him to come prove his swordsmanship skills at the castle. For a fee of 20 Rupees, Link can train against three of Russell's guards, and if he hits them at least 60 times before he gets hit 3 times, he will be rewarded with a Heart Container.

Link can continue to train with Captain Russell to obtain a variety of treasures. By getting between 60 and 119 hits, Link will receive a medium-rare treasure, such as a Dragon Scale or a Pirate Necklace. By scoring between 120 hits and 199 hits, he will be rewarded with a rare treasure like an Ancient Gold Piece or a Mystic Jade. Obtaining over 200 hits will reward Link with a Regal Ring or an Alchemy Stone. If Link attacks the three soldiers from 900 to 999 times,[4] Russell bestows him with the title of captain.[5]

Guard Captain Russell may have been named after ラッセル車 (Russell Car), the Japanese word for "wedge plow."