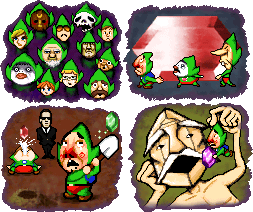 Please improve it as you see fit. Editing help is available.
This article has been flagged since October 8, 2009.

Uncle Rupee promises a middle-aged man entry to this so-called paradise if he collects enough Rupees and throws them into a pool of water. After the man agrees to the task, he is given the name of Tingle. Tingle spends much time and travels to many different lands in search of Rupees. During his journey, however, he meets the Grand Fairy in the Fairy Garden. She reveals that Rupeeland is a horrible place where evil reigns and freedom does not exist.[1][3] He finds out that he is not the only one- there have been many Tingles in the past.[4] Once they had collected enough Rupees, they were sent to Rupeeland where they will live as Uncle Rupee's slaves. Uncle Rupee plans to turn the entire land into a Rupeeland once he gets enough Rupees.

When Tingle learns the truth about Rupeeland, he has a hallucination of what it would really be like. He sees this in the form of a twisted game called Bad Uncle Rupee's Ashen Rupeeland. His hallucination depicts numerous Tingles being enslaved by the evil Uncle Rupee in a barren wasteland.