"This armor has built-in electricity resistance thanks to its source material--an ancient marvel called "rubber." Such technology does not exist in this modern age."
— In-game description

The Rubber Armor is an item from The Legend of Zelda: Breath of the Wild. It is body armor created with ancient technology and built-in electric resistance thanks to the marvelous ancient material "rubber" which no longer exists in Hyrule in modern times. It can be obtained from one of the two Treasure Chest in the Toh Yahsa Shrine uncovered by completing the Shrine quest "Trial of Thunder" at Thundra Plateau.

This armor is a piece of the set comprising the Rubber Helm and Tights. Each piece of the set grants one level of Shock Resistance which can be further increased the more pieces of this set or Topaz Earrings are worn. Link can dye it at the Kochi Dye Shop.

Once all three pieces are upgraded to level 2 (★★) or higher, the worn set grants the Unshockable Bonus which makes Link immune to lightning, electric attacks, and being shocked thus the armor is ideal for combating electric enemies, though it offers no protection from Vah Naboris' lightning which only the "Lightning Proof" Thunder Helm can withstand. It also allows Link to approach Farosh without worrying about being shocked by the ball lightning the Dragon spirit involuntarily emits from its body, thus it is extremely useful for obtaining Farosh's Dragon Parts. 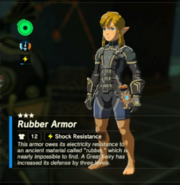 Retrieved from "https://zelda.fandom.com/wiki/Rubber_Armor?oldid=533276"
Community content is available under CC-BY-SA unless otherwise noted.