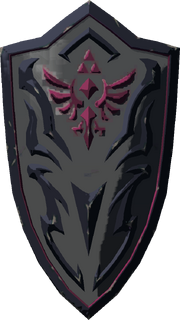 Breath of the Wild
70

Breath of the Wild
14

Royal Guard's Shields are found in Hyrule Castle, either abandoned or being used by the Enemies inside. They were created using the Ancient Technology of the Sheikah for use of the Royal Guards of Hyrule Kingdom.[1] Though they have an incredibly high defense, a structural weakness led to their low Durability, making them impractical for combat.[1]

One Royal Guard's Shield can be found in the King's Study, which is within Hyrule Castle's Library.

If Link wears a Royal Guard's Shield while talking to Selmie, she will be unimpressed to the point of yawning and calls them flimsy pieces of garbage that are worthless to serious Shield Surfers, due to their poor Durability making them unsuitable for Shield Surfing.[2]

Being made of metal, Royal Guard's Shields will attract Lightning if they're equipped during thunderstorms. However, they won't burn like wooden Shields do when exposed to Fire or a Scorching Climate. They will also sink if they're dropped in water, but they can be picked up and manipulated with the Magnesis Rune.