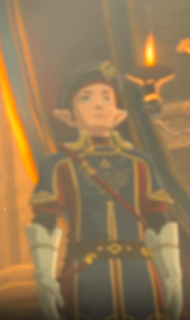 The Soldiers seen in the throne room in Ocarina of Time wear royal purple breeches under their plate armor and graves. They also have more ornamental helmets with golden tips and purple spears. Several guards are depicted guarding the King of Hyrule in his throne room, which can be seen through the window in the Courtyard. If Link shoots a Deku Seed at the western window in the Courtyard, a Royal Guard will scold him. [2]

Ultimately they were either killed or forced to retreat when Ganondorf overthrew the castle. Several broken spears and helmets can be found around the entrance to Ganon's Castle.

Several Soldiers with ornate shields protected Princess Zelda in Kingdom of Hyrule's last stand against the Twilight invasion. When the Shadow Beasts stormed the throne room, the Soldiers were violently slain.

In certain areas of Hyrule Castle, Wolf Link can Sense the ghosts of the Royal Guard. They will point in the direction that he needs to go, or towards points of interest.

In Breath of the Wild, the Royal Guard wear an Armor Set known Royal Guard Set. They wear a blue and red Royal Guard Uniform with white gloves, a beret style Royal Guard Cap, and white Royal Guard Boots. In one of the Recovered Memories that Link regains, Royal Guards are shown standing around King Rhoam during his ceremony to entitle the Champions. During Recovered Memory #11 "Shelter from the Storm", while talking to Link as they wait for a storm to pass beneath a tree east of Scout's Hill near the Bridge of Hylia, Princess Zelda mentions Link has dedicated himself to the path of a knight of the Royal Guard like his father, before asking him what he would do if he realized one day that he realized he just wasn't meant to be a fighter but everyone said he had to be one due to being born into a family of the Royal Guard, would he have chosen a different path. According to Purah's Diary, Link was the youngest member to be appointed to Hyrule's Royal Guard, which she refers to as the "Imperial Guard of Hyrule Castle." 100 years after the Great Calamity, Link is the only known surviving member of the Royal Guard and after Dark Beast Ganon's defeat he returns to his role as Princess Zelda's personal knight and bodyguard. Unlike other members of the Royal Guard, due to his status as the hero chosen by the Master Sword and the Hylian Champion, Link wears the Champion's Tunic and Hylian Trousers instead of the Royal Guard Set. However one Royal Guard Set survived the Great Calamity, which Link can acquire during the "EX Royal Guard Rumors" Side Quest. During said quest, Link must read Super Rumor Mill V4 at the Riverside Stable. The author Traysi reveals that according to a former maid of Hyrule Compend Castle, the surviving Royal Guard Set can be found within Hyrule Castle and that she hopes one day that the kingdom is restored as she hopes that a Royal Guard in shining armor will come a sweep her off her feet.[3]