Zelda Wiki
Register
Don't have an account?
Sign In
Advertisement
in: Characters with Missing Genders, Groups, Groups in Spirit Tracks 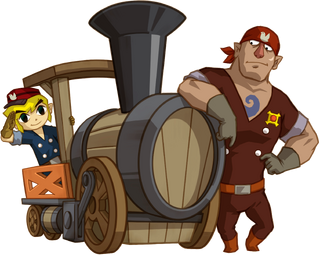 Link and Alfonzo, the two most prominent Royal Engineers

Spirit Tracks
Royal Engineer,[1] also known as Train Engineer,[name reference needed] is a title in Spirit Tracks. It is given those in charge of transporting both people and goods via train around the kingdom of Hyrule.[2] Since trains are the primary source of transportation, it is thanks to these engineers that the citizens of the land can travel to anywhere in the kingdom using the Spirit Tracks that the Spirits of Good placed throughout the four realms after the War that happened between Malladus and the Spirits of Good.[3]

All Royal Engineers wear a similar uniform that have a dove design on them, the mark of a true engineer.[4]

To become a Royal Engineer, the person wishing to become an engineer must have an audience with Princess Zelda. This event, known as the Engineer Graduation Ceremony, is held in Hyrule Castle. If the princess grants permission, said person will be personally given a certificate by Princess Zelda herself which proves their status, allowing them to operate a train by themselves.[5][6][7]

Link begins the game as an apprentice train engineer on his way to Hyrule Castle for the graduation ceremony where he will be given the title of Royal Engineer by Princess Zelda herself. During the ceremony, Zelda slips Link a note warning him about Chancellor Cole and asks him to meet her in private to help her find out the reason as to why the Spirit Tracks have begun to disappear.

The only other known characters with the title of Royal Engineer are Alfonzo, a Master Train Engineer who is also Link's mentor and Ferrus. He gives Link his final exam which involves getting to Hyrule Castle in less than 300 seconds.[8]

As a Royal Engineer, Link is expected to follow the signs that have been placed around the Spirit Tracks when he is transporting a passenger from one train station to another. These signs include blowing the train's whistle, slowing down, and speeding up. Failure to follow these signs will cause the passenger to become displeased with Link's driving. If the young hero continues to ignore the signs (or suddenly uses the emergency break), the passenger will get angry and disembark the train.