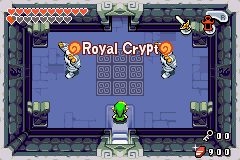 The Royal Crypt is a mini-Dungeon in The Minish Cap.[1] It is the tomb of Gustaf, an ancient king of Hyrule,[2] whose spirit provides Link with a golden Kinstone Piece that can be used to access Veil Falls.[3][4]

Entrance to the Crypt

The Royal Crypt is situated in the graveyard of the Royal Valley, which is located to the west of Hyrule Castle and can be accessed from Hyrule Field.[5][6] After Link has obtained the Water Element from the Temple of Droplets, he is visited by the spirit of Gustaf, who tells him to "stand before [him]".[7] He marks the location of the Royal Crypt on Link's Map, which Ezlo notices, saying that they should visit it after they have visited the Elemental Sanctuary.[8] Link is also told to visit the Royal Valley by Gentari.[5] In order to reach the entrance to the Crypt, Link must navigate the maze-like forest leading up to the graveyard,[9] seek the help of Dampé the gravekeeper,[2][10][11] and obtain the Graveyard Key.[12] He must then open the entrance by using the Picori Blade to duplicate himself and activate three Switches.

Although it belongs to the Royal Family of Hyrule, the Royal Crypt, like many other burial sites in The Legend of Zelda series, has a eerie, macabre atmosphere.[13] It is home to undead enemies such as Gibdos and Stalfos, and it is in a state of disrepair, containing cracked floors, torn carpets, and deep pits that pose a danger to Link. In order to navigate the mini-Dungeon, Link must make use of the Picori Blade and the Flame Lantern.