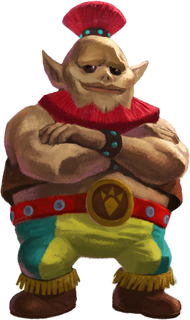 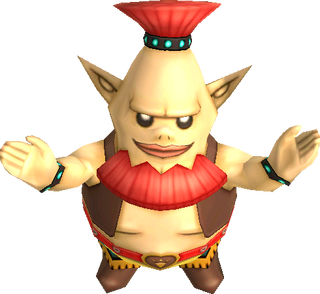 Rosso is a character in A Link Between Worlds.[3] He is one of the Seven Sages descended from those who sealed the Sacred Realm long ago.

Rosso is a miner who lives north of Kakariko Village at the base of Death Mountain, and owns an Ore Mine at the top of the mountain. He gives Link the Power Glove after noticing that the young hero cannot lift rocks. If Link picks up all of the rocks around Rosso's house, he will reward him with Rupees. After Link clears the Tower of Hera, Rosso goes missing while on a mining expedition, having been kidnapped by Yuga and turned into a Painting. Yuga eventually uses Rosso and the rest of the Sages' power to release Ganon from his seal in order to merge with the Demon King. Yuga then hides Rosso's Painting within the Ice Ruins in Lorule, a frozen labyrinth that contrasts with Rosso's fiery nature.

After Link rescues him from the Ice Ruins, Rosso reveals that he always knew of his status as a Sage, but he always thought it inconsequential, as he was too busy mining rocks.[4] Afterwards, he tells Link that he simply wants to return to cracking rocks.[5] He remains in the Chamber of Sages, awaiting the time for all the other Sages to be rescued by Link. Once they are reunited, he combines his power with the others to cause the Triforce of Courage to materialize above them.

After Hyrule's Triforce is restored to the Hyrulean Sacred Realm and Lorule is restored following the revival of its Triforce, Rosso returns to Hyrule and is seen carrying rocks on Death Mountain with the Bouldering Guy.

Rosso's name is derived from the Italian word for "red", in reference to his red beard and red picture frame. Of the Sages who were first introduced in A Link Between Worlds, Rosso is the only one whose French name is the same in both the North American and European versions of the game.

Sages in The Legend of Zelda series
Community content is available under GNU Free Documentation License unless otherwise noted.
Advertisement