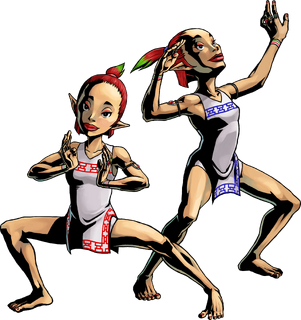 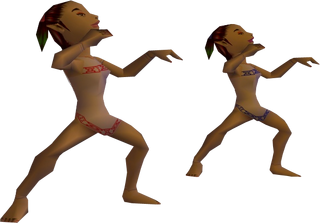 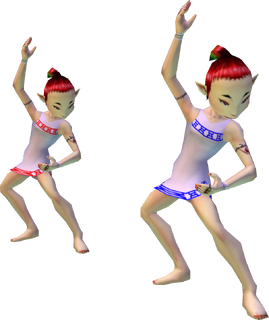 Judo
Marilla
The Rosa Sisters are a group in Majora's Mask.[1]

The Rosa Sisters are twin dancers in the Gorman Troupe who are visiting Clock Town to participate in the annual Carnival of Time.[1] They are one of the twenty characters in the game featured in the Bombers' Notebook, though they are both covered under one entry. The Bombers' Notebook does not mention their names, but by talking to the sisters at the Stock Pot Inn, it is revealed that Judo is the name of the one in the red dress, while Marilla is the one with the blue dress.

The Rosa Sisters can be found during the day walking around the Stock Pot Inn. During the night, they are found practicing their dance moves in West Clock Town. They seem troubled as they will have to perform their choreography at the Carnival of Time without any prior rehearsal.[2] Moreover, their dance is not finished yet,[3] and they cannot decide on what other moves should be added to the dance in order to not bore the audience.[4][5] They also decided not to change the song since Guru-Guru, the troupe's musician, could get angry at such decision.[6] Marilla also thinks about blaming Gorman, the troupe leader, and going back to her village, but realizes her sister Judo would not approve of her decision.[7]

By wearing Kamaro's Mask, the mask filled with the dancing spirit of Kamaro, Link can teach the Rosa Sisters the choreography of the deceased dancer. The twins are impressed by the dance moves and quickly learn the choreography, joining Link in the routine and calling him their master.[8] The twins thank him with a Piece of Heart and ask him to go to their performance.[9] Even though, they are bothered at the fact that their troupe leader will not watch their dance.[10] They will also have to perform their moves without even seeing the stage.[11] The Rosa Sisters are last seen during the ending credits performing the choreography taught to them by Link at the Milk Bar. The visible audience is only a Soldier, presumably the one from West Clock Town who used to watch them practice.