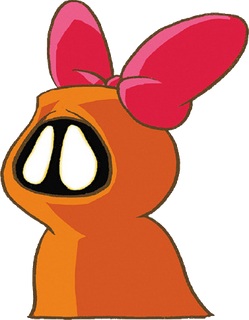 Rosa is a recurring character in The Legend of Zelda series.[2]

Rosa is an orange-cloaked, ribbon-wearing Subrosian first met after finishing the Gnarled Root Dungeon. As Link begins his search for the Rod of Seasons, he stumbles across Rosa, who is shouting about the Temple of Seasons falling into Subrosia. As she does not want people following her back to Subrosia, Rosa does her best to make sure nobody follows her.

Later on, Link meets Rosa again, giving her a new ribbon as she had recently lost hers.[1] Grateful, Rosa decides that she will go out with Link, enabling him to use her key to unlock locked doors across Subrosia, including the Tower of Summer.[3] Afterwards, Rosa will follow Link around Subrosia anytime he asks her. She will not, however, leave Subrosia, leaving Link if he does so. She will also leave if Link enters the Treasure Grove, the House of Pirates, or the sidesrolling tunnel to the Tower of Spring.[4]

Rosa is considered very attractive among their race.[5] Many Subrosians express shock, or jealousy if Link talks to them while traveling with Rosa.[6]

In a Linked Game of Oracle of Ages, Rosa appears on Crescent Island. She helps Link get his Shovel back from the Tokay. However, she will not follow Link around, telling him her trip's theme is that of "the independent woman."[7] She later appears at the Goron Dance Hall in Rolling Ridge, where she comments that she believes the Subrosian Dance is cooler.[8]

Rosa's Japanese name is ウララ, a popular Japanese girl name meaning "beauty" that also functions as a pun on her race's name, which is ウーラ. Because the race received another name in the Western world to preserve the meaning of "hidden," the Ūra Urara became the Subrosian Rosa to preserve the pun.