Zelda Wiki
Register
Don't have an account?
Sign In
Advertisement
in: Objects, Items, Objects in Ocarina of Time,
and 11 more 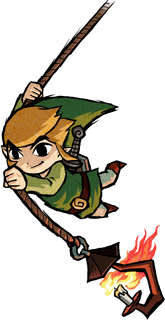 The Faces of Evil
The Wand of Gamelon
Ropes are recurring items and objects in The Legend of Zelda series.[1][2][name reference needed] Rope go unnamed in Majora's Mask 3D. They are mainly used to swing or cross as tightropes from one area to the other.

In Ocarina of Time, Tight Ropes appear in Goron City. Three lines of Rope are tied to the walls and a log of the top floor onto a center platform that 'floats' in the middle of the cavern, where a Goron can be found curled in a ball. Link can cross these Tight Ropes to reach the platform.

Cheval Rope is a quest item in Oracle of Ages, created and named after Cheval, in the hopes of helping people of the world. It is obtained in Cheval's Tomb in Labrynna's present time along with the Flippers, and given to Rafton in the past to build the Raft.

In The Wind Waker, Rope appears as an object that Link can grab onto and use to cross a room by swinging from one side to another, or by swinging from one Rope to another. The Ropes work as Link builds up momentum by consistently swinging on the Rope, and thus can be propelled further into the air dependent on how many swings he has completed before releasing himself. The Rope's swing can also be stopped, once Link has grabbed a hold of it, and its direction of swing can be adjusted and set to swing in different directions and angles. Once stopped, Link can also climb up Rope as well to reach platforms above. The Grappling Hook is also used for the same purpose.

Rope first appears below the decks of Tetra's Ship as introduced by Niko. In a sea-faring test of skill, Niko challenges Link to make it from one side of the room to the other using only the Ropes and platforms provided, serving as a tutorial teaching Link how to swing on Rope. The first time Link completes the challenge, Niko rewards him with the Spoils Bag. The second time becomes harder, and the reward is the Bomb Bag. Such Ropes are also used to great extent in the Forsaken Fortress, as the second level of many of the rooms require Link to Rope-swing across the large gap in the floor to the other side, in order to pass to the next room and progress through the dungeon. Certain areas have vines instead of Rope.

In Twilight Princess, Tight Ropes are used by Wolf Link to cross from one side to the other. Tight Rope appears several times in Hyrule Castle and in the loft above Telma's Bar, the latter of which becomes necessary to cross in order to reach a passage into the Hyrule Castle Sewers, after Zant steals the Fused Shadows and curses Link and Midna.

In Skyward Sword, Tight Ropes appear in numerous locations. To safely cross the Rope, the Wii Remote must be carefully balanced to prevent Link from falling over. Some Bokoblins may also attempt to cross a Tight Rope and must be knocked off to proceed. In the Ancient Cistern, Link also climbs a Rope-like thread in the underworld section of the dungeon and is chased by Cursed Bokoblins who will attempt to drag him down as he climbs.

Ropes are used to latch onto and climb higher ledges in The Faces of Evil. Ropes are discarded upon use, requiring Link to purchase more from Morshu's shop in packs of three for 10 Rubies. Link can carry a total of 99 Ropes.

Ropes are used to latch onto and climb higher ledges in The Wand of Gamelon. Ropes are discarded upon use, requiring Zelda to purchase more from The Merchant's shop in packs of three for 10 Rubies. Zelda can carry a total of 99 Ropes.