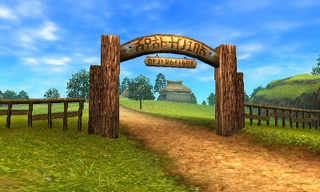 Milk Road
Romani Ranch,[1] also known as Milk Village,[2] the Village of Milk,[3] and Chateau Romani's Village,[4] is a location in Majora's Mask.

The Ranch is located in south-west Termina, and is famous for its extremely tasty Chateau Romani.[5] It is owned by Cremia, who lives with her younger sister, Romani.[6] The Ranch is home to several other people and features a number of sidequests and items. Link will not be able to access the Ranch before the Third Day unless he has a Powder Keg, as someone (likely the Gorman Brothers) have placed a large boulder in front of the Ranch entrance.[7] With a Powder Keg, Link can use it to blow up the boulder and access the Ranch sooner.

If Link arrives on the First Day, he will find that Epona, who was stolen by the Skull Kid, is being kept safely in a stall.[8] Romani will teach him "Epona's Song," allowing the young hero to summon her by playing the Ocarina of Time and to ride her around Termina, however only after Link has completed Romani's target practice.

Prior to the events of Majora's Mask, the father of Cremia and Romani passed away; however, he left them with Romani-bred cows that are able to produce a special kind of milk called Chateau Romani, which the Ranch is most famous for.[9][10] Ever since then, Cremia has been taking care of both the Ranch and her sister, although lately she has been having some trouble due to the nearby Gorman Brothers, who preside over their own Ranch.[10] The two Brothers have been using underhanded tactics to hinder their Milk business, such as breaking Bottles of Milk during deliveries, although Cremia is not aware of who is responsible for these actions.[10] It is also likely that they were the ones responsible for blocking off Romani Ranch with a huge boulder, preventing Cremia from peddling supplies to Clock Town's Milk Bar.[11]

When Link arrives at the Ranch on the First Day, he finds Epona and meets Romani. She goes on to tell Link that she has been practicing for the arrival of the ghost-like creatures that come to the Ranch and steal the cows every year as the Carnival of Time approaches.[12] Her older sister does not believe her, and so Romani recruits Link and asks that he come to the Ranch at 2 AM., which is when "They" will come.[13] Together, Link and Romani fend off the ghosts until dawn, saving the cows. As thanks, Romani rewards Link with a Bottle containing Romani Milk and calls him a "little hero."[14]

On the evening of the Second Day (presuming the cows have been saved the night before), Cremia will invite Link to accompany her on her milk delivery to the town's Milk Bar by wagon. If Link accepts, Cremia and Link will discover that the road to Clock Town has been blocked off by the Gorman Brothers; as such, they are forced to take a detour through the Gorman Track.[15] The Gorman Brothers, each wearing a Garo Mask and riding on horseback with pitchforks, lay siege to the wagon and try to break the milk bottles.[16] Link chases them off using his Bow and Arrows, and the two escape without any major harm done. If Link manages to save at least one Bottle of Milk, Cremia rewards him with Romani's Mask.

In an attempt to avoid the Moon's collision with Termina, the staff of the Stock Pot Inn are intent upon taking refuge at the Ranch on the night of the Final Day.[17][18] However, Cremia believes that the Ranch is not safe either, preparing herself and her sister for the worst.[19] After Link saves Termina from its doom, Romani can be seen practicing her archery skills in the Ranch as Cremia cheers her on.

Mama's House is the residence of Romani and Cremia. It is the largest building on the Ranch.

The Barn is where Cremia keeps the livestock of the Ranch, namely the ever-coveted Cows. The Cows are milked here daily, and a few Rupees can be found in the hay in the corners.

The Cucco Shack is home to Grog and is open from 6 AM to 8 PM.[20] The Cucco Shack has 10 little Cucco chicks in it, as well as decorative Cucco paintings on the walls. If Link gets all 10 Cucco chicks to follow him around while marching with the Bremen Mask, they will grow and Grog will reward him with the Bunny Hood.[21]

The Doggy Racetrack is home to Mamamu Yan and is open from 6 AM to 8 PM.[22] Link can come here to watch and bet on Dog races. If he wins 150 Rupees or more, the young hero will win a Piece of Heart.