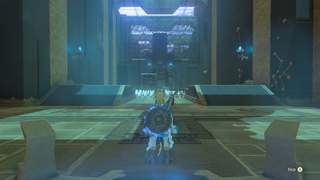 Spirit Orb
The Rohta Chigah Shrine,[1] designated by the Trial name Stop to Start,[1] is an Ancient Shrine in Breath of the Wild. It is exclusive to The Champions' Ballad DLC Pack.

To access the Shrine, Link must defeat the Decayed Guardian and the various Lizalfos that appear in the camp north of the Abbey during the trial. After the last enemy is defeated, the Shrine will rise up from beneath the ground. As Link enters the Shrine, he is greeted by its Monk, Rohta Chigah.[2]

The Rohta Chigah Shrine features three long corridors arranged in a U-shape. Rohta Chigah waits in a chamber at the end of the third corridor. In front of the entrance to the Shrine is a spike floor arranged in a checkerboard pattern. The floor alternates between half of the spikes being raised and the other half being lowered. A climbable metal block and long metal platform lie on the spike floor while a smaller metal platform lies next to the spike floor.

Beyond the moving spike floor is an open gate leading to a platform below and some gears that gears are rotating towards walls of spikes above them. After the second gear is three conveyor belts. The first is moving towards the wall of spikes next to the gear while the second and third move left and right, respectively, towards the rotating spike walls on either side.

In the second corridor, three Spiked Boulders swing back and forth over a large chasm that Link must use the Paraglider to cross. At the other side of the chasm, Link must drop in front of a portcullis and press the nearby Switch to open it.

Once the portcullis opens, a wall behind the Switch also opens, revealing a large wall of spikes that begins advancing down the third corridor behind Link. The third corridor has a narrow walkway with small stone blocks on the path. A number of moving platforms with spikes line the wall and ceiling of the corridor. As Link advances, some of these platforms will launch forward and will later retract as the wall of spikes approaches.

Upon approaching Rohta Chigah, the Monk will present Link a Spirit Orb for completing the Trial,[3] and will wish Link well before fading away.[4]

A stone Treasure Chest containing a Forest Dweller's Shield can be found on a ledge above the moving spike floor to the right of the Shrine entrance.