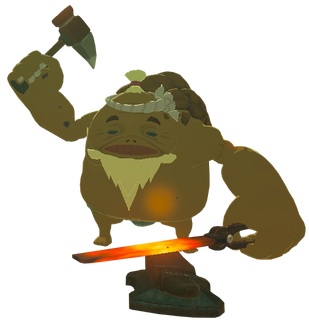 Rohan is a character in Breath of the Wild.[3]

Rohan is a master Goron blacksmith who lives in Goron City. His smithy and house is located in the City's northeast. Rohan is strict and serious about his trade, and does not like to be disturbed while he is working or resting.[4][5] He is known to supply the Flamebreaker Set of Armor sold at Ripped and Shredded.[6] He is also the mentor of Fugo, who is training to become his successor.[7] According to Fugo, Rohan had fought the Igneo Talus at Darunia Lake when he was young to grow strong, and is said to have defeated every Igneo Talus in existence.[8] For likely the same reason, he had sent Fugo to defeat the Igneo Talus at the Lake as part of his training.[2]

Rohan is able to reforge the Boulder Breaker if it breaks or is lost, requiring that Link brings a Cobble Crusher, five pieces of Flint, and a Diamond.[9] Rohan also expresses skepticism of Link's inheritance of the sword, but accepts it for what it is.[10]