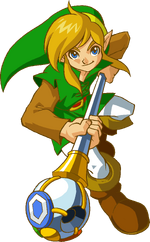 If the holder of the Rod of Seasons stands on a Tree Stump, swinging it will cause the seasons to change in order starting from Winter. To be able to change each Season, however, the relative Season Spirit must be visited to obtain its Season power. The power of Winter is the first Season power obtained, then the power of Summer is second. The power of Spring and the power of Autumn can be obtained in either order, although Spring is required to access the Dancing Dragon Dungeon and Autumn is required to access the Unicorn's Cave, suggesting that this is the regular order.

Because of Link swinging the Rod of Seasons the same way as a sword, it can be used to pick up objects, push enemies and block certain projectiles, like Octorok's rocks. The only enemies that can be hurt directly by the Rod are undead foes, including Stalfos, Gibdos, Ghinis, and the two Poe Sisters.