"Th-That's it! It's so good that I dream about it... Dodongo Cavern's finest quality rock sirloin! This is my absolute favorite! Blessed be this meal!"
— Hungry Goron

Rock Sirloin (特上ロース岩, Tokujou Rōsu Iwa?, Extra-Special Roast Rock), also known as Sirloin Rocks, are a recurring item in the Legend of Zelda series. It is a type of rock consumed by Gorons native to both Hyrule and Termina. It is called Rock Roast in The Legend of Zelda: Breath of the Wild which is closer to the literal translation of its japanese name.

Prior to Link slaying King Dodongo, a particular Goron tells him that he wants to eat Sirloin Rocks from Dodongo's Cavern.

Rock Sirloin is a delicacy among the Gorons. Due to a curse placed on Snowhead, a perpetual and intense winter has buried the Gorons' sources of Rock Sirloin beneath the ice, cutting off their food supply. However, one Goron has hidden a piece of Rock Sirloin within one of the Goron Vases attached to the chandelier in the Goron Shrine. After causing the chandelier to spin by lighting all the torches in the shrine, Link can roll off a ramp in his Goron form from the highest level of the shrine and into the correct jar in order to retrieve the Rock Sirloin. It can then be carried to the cold and Hungry Goron who is stuck on a frozen outcropping in the Mountain Village. The food restores the Goron's strength, and he is able to roll down. As a reward, he gives Link Don Gero's Mask.

Interestingly, the Goron refers to the Rock Sirloin as being from Dodongo's Cavern. It is not known whether or not this is the same as the dungeon from Ocarina of Time or some manner of Terminan equivalent.

Rock Sirloin is briefly mentioned by a Goron bathing in Death Mountain's Hot Spring. He states that there is nothing better than lounging in the hot spring and eating Rock Sirloin.

Rock Roast in Breath of the Wild shares the same basic shape and appearance of the Rock Sirloin from previous games. It appears at the bottom of Gortram Cliff near a lava pool southwest of Gorko Tunnel and is used in the Shrine Quest "A Brother's Roast." Link must bring one to Gonguron so it can be cooked in a nearby Cooking Pot to create Grilled Rock Roast which gives Gonguron the energy he needs to finish digging the tunnel to reveal the Kayra Mah Shrine.

"That little Hylian from before is named Link. He's got a respectable appetite. Loves to eat meat, fruit, vegetables... all sorts of things a decent person wouldn't dream of eating. Link will cook up and eat just about anything. I offered him some Grade A rock roast to help refine his palette. I asked him how it tasted. He like it so much, he was speechless. I knew Hylians could eat rocks too. Eating isn't the only thing Link and I have in common. The little guy is also incredibly strong! He said sometimes when he focuses, it feels like time slows down. Heh! I really like that guy. He's the type of guy you can trust to have your back and also have a nice hearty meal with. Yeah! That settles it! From now on, Link is an official brother."
— Daruk's Training Journal

Daruk's Training Journal often mentions different grades of Rock Roast much like there are different grades of meat and poultry. He mentions hunting down Prime Rock Roast for dinner in one entry. However Daruk fails to realize Hylians do not eat rocks as he offered Link a Grade A Rock Roast to refine his palette unaware meat, fruit, and vegetables Link ate were part of a Hylian's normal diet. Link managed to consume the Rock Roast with apparently no ill effects. It is unclear if Link enjoyed it or not though Daruk assumed he did enjoy it as he took Link's silence for enjoying it so much he was rendered speechless, though it is likely Link barely managed to endure consuming it it similar to how he manages to avoid breaking his teeth when consuming Rock-Hard Food. However as a result, Link and Daruk became sworn brothers not long after this meal. Unfortunately Daruk was left convinced Hylians could in fact eat rocks as Gorons do even giving Princess Zelda his best Rock Roast though she politely refused with a grimace though Daruk assumed she must have something foul weighing on her mind and wasn't hungry. He also planned to treat Link to Gourmet Sirloin Rock after learning Link's strength came from hard work and never giving up.

Rock Sirloin appears in The Land of Myth, where the brainwashed Darunia uses it to heal each time he is defeated, forcing Impa & Sheik to take control of the West Boulder Keep to destroy his stash with a Boulder, preventing him from healing himself. Interestingly, Rock Sirloin can be seen on one of the table in the Chief's Room (Darunia's room) even after the stash is supposed to be destroyed (this is because it is part of the Stage design). 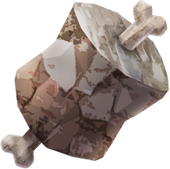 In addition to its use in The Land of Myth and appearing the Chief's Room, Rock Sirloin appears as a Food item for Companion Fairies and is classified as a weird-type food item. Like all food items, it has 3 grades: Bronze, Silver, and Gold. It is also mentioned by Darunia in Linkle's Tale: Powers Collide.

The term Sirloin refers to a cut of beef from either the lower (in the US) or middle (in the UK) part of the back of a cow. Rock refers to the fact it is actually a form of rock from Dodongo's Cavern. The name itself is also a reference to Rock Sirloin's meat-like shape and the fact that Gorons eat it as food (as Sirloin is a type of meat).

The term Roast in Breath of the Wild refers the type of cooking though it may also be a reference to Roast Beef, a type of roasted meat. This fits with it primary role for making Grilled Rock Roast. At one point in Daruk's Journal he mention Gourmet Sirloin Rock which is similar to Raw Gourmet Meat while Prime Rock Roast is similar to Raw Prime Meat. Grade A Rock Roast is a reference to Grade A poultry, which is the highest quality poultry according to the USDA rating system.

Retrieved from "https://zelda.fandom.com/wiki/Rock_Sirloin?oldid=542281"
Community content is available under CC-BY-SA unless otherwise noted.