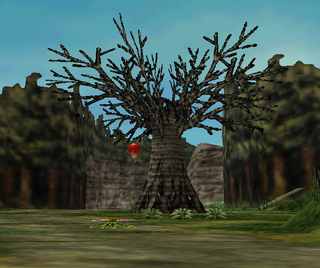 The Road to Southern Swamp is a location in Majora's Mask.[1][note 1] Found at the southernmost extent of Termina Field, it leads directly into the Southern Swamp and associated regions.

The road features several dead trees, Bad Bats flying about, and packs of Wolfos that emerge at night. There is also a Secret Grotto containing a Treasure Chest with 20 Rupees. A Piece of Heart is hidden within the branches on top of the withering tree at the center of the road, and can only be reached via climbing a set of vines sprawling down its side. A lone Bad Bat positioned near the top obstructs the way forward, and must be defeated in order to reach it. The path leading to the Swamp Shooting Gallery also features Deku Babas, a Gossip Stone, Deku Flowers, and a pond with Spring Water. Tingle can also be seen flying on his balloon next to the Southern Swamp entrance.

Situated at the edge of an eastern route protruding from the main pathway is one of the game's three shooting galleries. The manager charges 20 Rupees per playthrough. The rules are similar to those of its Clock Town counterpart; the objective is to hit as many targets and garner as many points as possible within a time limit of 1:40. Regular Mad Scrubs are worth 30 points, Guays are worth 60 points, and 100 points are awarded for hitting either a Wolfos or hidden Mad Scrubs located at either corner of the shooting range, one on a rock, the other on a branch. In addition, there is a bonus of 10 points for each second remaining at the end of the game, provided Link earns a perfect score.

The two most significant prizes attainable at the Swamp Shooting Gallery include a Quiver upgrade and a Piece of Heart. The former is acquired by achieving a score of at least 2,120 points, after which amassing a score of that same threshold grants Link an additional playthrough at no extra cost. The Piece of Heart can only be obtained by garnering a perfect score after already being awarded the Quiver.

The Swamp Fishing Hole only appears in Majora's Mask 3D. For 50 Rupees or in exchange for a Fishing Hole Pass, Link can fish in the hole with either the standard or Sinking Lure Fishing Rod. Link can catch 12 different type of fish in it.