Zelda Wiki
Register
Don't have an account?
Sign In
Advertisement
in: Hyrule Field, Stables, Locations, Locations in Breath of the Wild 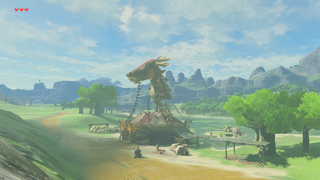 Riverside Stable is a location in Breath of the Wild.[citation needed]

Riverside Stable is a Stable located in Hyrule Field and is operated by Ember. Inside, Link can find a poster depicting a Recipe for Crab Stir-Fry, as well as the book Super Rumor Mill V4 on a table. The Hylian travelers Endai, Kazul, and Spoone can occasionally be seen passing by the Stable on horseback. Pikango posts himself here as well, working on a painting of Death Mountain in good Weather. If Link shows him his Sheikah Slate, Pikango will tell him the location of Lake Kolomo as part of the "Captured Memories" Main Quest.[1] At the rear of the Stable are two small fenced off islands that act as pens for the Stable's farm animals. A dock is also located at the eastern part of the Stable and has a Raft tied in place.

There are two Quests Link can acquire at the Riverside Stable. Gotter, a man seeking out Recipes favored by the Royal Family, with grant Link the Side Quest "A Royal Recipe". Parcy, a traveler who used to sneak into Hyrule Castle, offers the "The Royal Guard's Gear" Side Quest. By reading Super Rumor Mill V4, Link can update the "EX Royal Guard Rumors" Side Quest to learn of the exact locations of the Royal Guard Set.

Unlike most Stables, which feature guides who offer insight into the cardinal directions surrounding their respective Stables, Parcy offers various directions into Hyrule Castle instead.