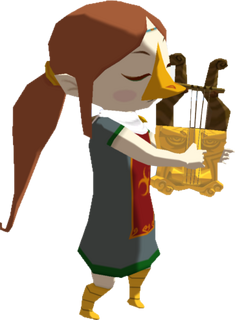 Medli playing the Rito Harp from The Wind Waker

Reflects light
Partially awakens the Master Sword's Power to Repel Evil
The Rito Harp is an object in The Wind Waker.[name reference needed] It is Medli's most valued possession.[1] The Rito Harp went unnamed prior to its appearance in the non-canonical spin-off title, Hyrule Warriors.

According to Medli, playing music on the Rito Harp is an important duty of being the Sky Spirit Valoo's attendant, and as such, she spends most of her free time practicing in order to improve her Harp skills.[2][3] The Rito Harp plays an important role in the game due to it being required to awaken Medli as a Sage as well as restoring the Master Sword's true power.

It is unknown how Medli came in possession of the Rito Harp; however, the young Rito girl mentions that when Komali's Grandmother saw the Harp that Medli was carrying, the old woman sensed what destiny had in store for the young girl, but kept quiet about it, instead using her position to teach Medli all that she had to know until the day fate would call her.[4]

After Link meets Laruto, the former Sage of Earth before Ganondorf murdered her, she informs the young hero that he must look for the one carries the same sacred instrument as her, a Harp, and play the "Earth God's Lyric", the melody that will awaken the new Sage of Earth.[5] The young hero then travels to Dragon Roost Island, where he sees Medli practicing with the Rito Harp in one of the island's cliffs. As instructed by Laruto, Link conducts the "Earth God's Lyric" as Medli plays along with the Rito Harp, which causes the young girl to faint.[6] She meets Laruto in her dreams, where the two of them play the sacred song with their Harps. Realizing her new duty, Medli wakes up as the new Sage of Earth, overwhelmed by the fact that she can actually do something to help the world.[7] The young Rito girl then urges Link to take her to the Earth Temple to thus complete her duty as the Sage of Earth.[8]

Inside the Earth Temple, the Rito Harp plays an important role; by using the "Command Melody", Link gains the ability to control Medli. By making her stand near a ray of light, Medli can take out her harp to change the direction of rays of light, which often is part of a more complex "light puzzle" and thus serving as a second Mirror Shield. This function of the harp is extremely useful to make Blue Fog disappear, complete the various light puzzles around the Earth Temple, and even shed light on Poes to make them appear.

After defeating Jalhalla, Link conducts the Earth God's Lyric for Medli as she plays the song on the Rito Harp. As they play it, Laruto temporarily appears next to Medli to play along. This restores some of the power of the Master Sword, to which Medli takes notice and urges Link to go to the Wind Temple. Medli remains in the Earth Temple to assure the power to repel evil stays in the Master Sword, which is done so by continuing to play the Rito Harp. 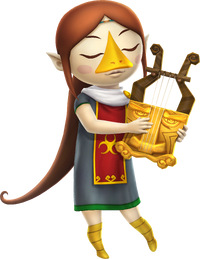 In Hyrule Warriors, the Rito Harp is a class of Weapon used by Medli. It is associated with Light. Along with Medli, it is free DLC released in version 1.9.0 for the Wii U version, and version 1.3.0 for Hyrule Warriors Legends. The Nintendo 3DS version requires the purchase of the Master Wind Waker Pack to unlock the higher levels.

Medli slashes two gusts of wind at the group of enemies in front of her, forming a large typhoon ball that traps and damages her enemies. She then flies up into the air and then comes crashing down over it, sending her enemies flying at the typhoon's burst. Medli then stands up in a brief dizzy state.