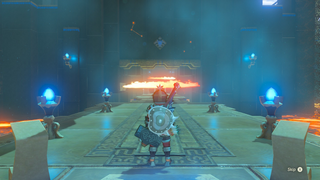 The interior of the Rinu Honika Shrine

Rudania's Emblem
The Rinu Honika Shrine,[1] designated by the Trial name Block the Blaze,[1] is an Ancient Shrine in Breath of the Wild. It is exclusive to The Champions' Ballad DLC Pack.

The Rinu Honika Shrine is found in the Eldin Canyon to the south of Darb Pond. It is one of three Ancient Shrines accessed as part of the "EX Champion Daruk's Song" Main Quest.

Link will find the Goron Blood Brothers preparing to train at Darb Pond, just like Daruk did 100 years ago.[2] Heehl points out the Glowing Ring on top of the Pond,[3] sharing their plan to stand on the Lava at that spot.[4]

To access the Ancient Shrine, Link must safely fall through the Glowing Ring. This can be accomplished by using Magnesis to lift a nearby steel crate on the shore and drop it in the center of the Ring, allowing Link to glide into it without touching the Lava. Alternatively, Link can use the metal crates to push around the rocks near the shore, creating a path to the Glowing Ring. After doing so, the Rinu Honika Shrine will rise from beneath the ground nearby. Upon entering the Ancient Shrine, Link is offered the trial by its Monk, Rinu Honika.[5]

The Rinu Honika Shrine features a winding walkway over Lava that leads to the Monk, Rinu Honika, at the very end. Along the walkway are columns that continuously release streams of Fire, requiring Link to maneuver around them or to otherwise partly eliminate the columns that the streams are mounted on. One column can be broken down by bombing the cracked block beneath its base, and another column by removing its steel block support by using Magnesis. This steel block can then be used to block the streams of fire ahead. All of these obstacles can also be avoided by wearing the complete Fireproof Armor, provided all of its pieces have been upgraded at least twice.

Link can also use the steel blocks to then cross a pool of Lava and reach a Treasure Chest containing a Stone Smasher. Following the columns is a gateway barricaded by more fire streams. A second steel block that lies in the lava nearby can be used to stack with the first steel block, thereby creating a safe passage for Link to slip by unharmed.

At the final stretch of the walkway is a platform obstructed by multiple Fire streams, serving as the final obstacle before the Monk. The platform can be manipulated using the nearby gyroscopic device. By tilting the platform's side upward, it is possible to use the Paraglider to glide over to Rinu Honika.