Riju is a very skilled Sand Seal rider, being able to maneuver around obstacles in the desert with great ease. When she and Link assault the Divine Beast Vah Naboris, she is the one who leads the charge through the sand, with Link following close behind her. She is also quite brave as it is revealed that she went to investigate Vah Naboris on her own in her diary and managed to avoid the sandstorms and Vah Naboris' lightning. However this caused her bodyguard Buliara to worry about her safety which was only made worse when her sand seal Patricia was spooked by a monster causing Patricia to head directly towards Vah Naboris, which was the last thing Riju remembered before she awoke to find a worried Buliara standing over her. Though she is determined to prove herself a capable leader, she occasionally doubts herself and even felt that the theft of the Thunder Helm happened because she was not yet ready to be chief. She blames the theft of the Thunder Helm on herself seeing it as a sign of her failing as a leader even refuting Buliara feelings it was her own fault and not Riju's. However Riju may have felt guilty as Builara refuses to leave her side after the incident with Vah Naboris thus Riju believes her recklessness lead to the theft as had she been more cautious then Buliara might not have been so focused on protecting her as the retired Captain of the Guards states the Yiga would have failed had Buliara been on the frontlines when the helm was stolen.

As the chieftain of the Gerudo and descendant of the royal line, Riju is also capable of wielding the power of the Thunder Helm. She mastered its power instantly upon using it for the first time. In many respects she is similar to both Lady Urbosa and Nabooru as she is loyal to the Kingdom of Hyrule even one hundred years after it had fallen during the Great Calamity, as she opposes Ganon and the Yiga Clan, though the latter is likely due to their attack on Gerudo Town and theft of the Thunder Helm. After Vah Naboris is freed, she offers to lend Link the Thunder Helm provided he assist her people in dealing with various problems thus allowing her to aid both Link and her people once more.

Riju is the daughter of the late Gerudo Chieftain who lead the Gerudo before her however following her passing the young Riju inherited the throne with only her bodyguard and adviser Buliara to guide and prepare her. She has a domesticated Sand Seal named Patricia who was a gift from her late mother and is also a Sand Seal oracle who provides prophecies and words of wisdom when feed fruit.

However some Gerudo are uneasy due to her young age and inexperience causing Riju to doubt herself at times though she remains determined to be a good leader like her mother and Lady Urbosa. Unfortunately Vah Naboris appeared after a century of dormancy and Riju took it upon herself to investigate it herself though while returning home her Sand Seal Patricia was spoken by a monster causing Riju to have an accident and was found by Buliara who blamed herself and afterwards refused to leave her side. To make matters worse the Yiga Clan stole the Thunder Helm which both Riju blamed upon themselves while trying to convince the other it was not their fault. 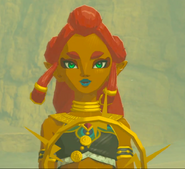 Riju holding the Thunder Helm
Add a photo to this gallery
Retrieved from "https://zelda.fandom.com/wiki/Riju?oldid=536153"
Community content is available under CC-BY-SA unless otherwise noted.