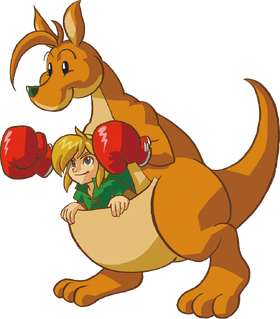 Era of Light and Dark
Ricky is a recurring character in The Legend of Zelda series.[6]

Ricky is a boxing kangaroo and one of three animal companions that Link can find in Oracle of Ages and Oracle of Seasons (the other two are Moosh and Dimitri). Despite having a pouch—which is characteristic of female kangaroos—Ricky is referred to as a male in the North American and European English manuals.[4] He is capable of scaling large walls and small holes in a single jump. He is also able to punch and briefly charge and unleash a Tornado Punch as his methods of attack. Link can use Ricky's Flute to call him, though this will not work everywhere.[7]

Depending on which animal Link befriends, the landscape of certain areas in Holodrum or Labrynna will change. If Link has Ricky join him, some areas within these regions may resemble a prairie-like landscape with occasional cliffs and a couple of holes that Ricky can jump over.

In Oracle of Seasons, Ricky lives in a small yard on Holodrum Plain east of Spool Swamp, which he claims is his backyard.[8] Ricky has faced Blaino in a boxing match but has lost, and Blaino has taken his boxing gloves. Link must face Blaino in a boxing match at his house and defeat him to win back Ricky's gloves. When Link gives these gloves back to Ricky, he will thank Link and offer to transport him to the once inaccessible areas of northern Holodrum. If Link does not own any of the other Strange Flutes, then Ricky will decide to join Link and gives him his flute.

If Link tries to take Ricky into Sunken City, Ricky will remark that the flooded city smells like medicine, which he cannot stand,[9] and will leave Link. This may be an excuse not to go into the city as Ricky cannot swim. Ricky can be taken into Horon Village however.

In Oracle of Ages, Ricky first appears shortly after Link completes the Wing Dungeon and prepares to sail for Crescent Island. After Rafton in the past tells Link that he needs a Sea Chart before going into the sea, Ralph shortly appears and hints that there could be a Sea Chart in present day. The Sea Chart is being held by Tingle, but he is unreachable due to the high cliffs and pits. Eventually Link meets Ricky who says that he has lost his boxing gloves. Link finds the gloves south of Lynna City near a tree in the beach area, where he uses the shovel to unearth the gloves. By returning the gloves to Ricky, he then helps Link reach Tingle, and leaves after this.

When Link tries to later venture into Symmetry City, he will encounter the Fairies from the Fairies' Woods, who ask Link to help an animal who got lost in their woods. The animal will either be Moosh, Ricky or Dimitri depending on whether Link has any of the Strange Flutes or not. Ricky would be one of the animals lost if Link has won the Strange Flute from the Shooting Gallery. If Ricky is found, he will decide to join Link and gives him his flute. Ricky's jumping ability is used in the Nuun Highlands, which helps Link locate the three lazy Carpenters needed to extend the bridge to the dystopic city.[10]

Ricky is encountered in the Oracle of Seasons manga by Akira Himekawa very much like he is in the game, but rather than getting his gloves back and then looking for him, Link arrives at the moment of his defeat. After getting back Ricky's Gloves, Ricky becomes an inseparable companion from Link, playing a large role in the eventual defeat of General Onox (Dark Dragon).

In Super Smash Bros. Ultimate, Ricky appears as a Spirit with the ability, Fist Attack Up, which raises the attack power of a Fighters fist.

The name Ricky is a short form of Richard. The Germanic name element ric- means "brave power", while hard- means "brave" and "hardy".[11]