Zelda Wiki
Register
Don't have an account?
Sign In
Advertisement
in: Monuments, Rito Village, Locations, Locations in Breath of the Wild 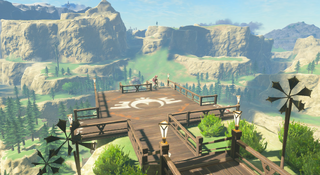 Revali's Landing is a location in Breath of the Wild.[1]

Revali's Landing is located in Rito Village. It is the largest platform in the village used by the Rito for taking off and landing from. It was named, and probably also constructed, for the Rito Champion Revali after his death.[2]