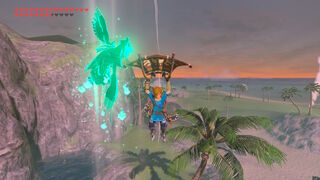 Propelling Link into the air
Creating an Updraft

Revali's Gale,[1] also known as the Power of Revali,[2] and Revali's Power,[3] is a key item and an ability in Breath of the Wild.

Link receives Revali's Gale from the spirit of the Rito Champion Revali, after defeating Windblight Ganon and calming the Divine Beast Vah Medoh.[4] Once the blessing is used, it launches Link into the sky and creates an updraft that can be re-used until it disappears. Like all Champion blessings in Breath of the Wild, it can be disabled from the Key Items inventory and cannot be used while inside an Ancient Shrine.

Revali is seen using this ability several times. In the second Recovered Memory, "Revali's Flap", he makes an entrance using this move to show it off to Link and does it again when he flies to Vah Medoh while taunting Link as he soars. In the fifteenth Recovered Memory "Return of Calamity Ganon, Revali's first reaction to a sudden quake is to use his gale to fly up to find out what happened and witnessed Calamity Ganon's return. In the first Recovered Memory of The Champions' Ballad DLC Pack, a visibly tired Revali attempting to summon an updraft in a desperate attempt to get it right, but gets caught in the whirlwind, falls out of the sky, and becomes distraught at his failure. After accepting the visiting Princess Zelda's call to become the Champion, Revali tries again to perform his gale, this time, mastering it and shoots three targets during his descent and uses his gale once more to get back into the air and shoot the remaining targets as Zelda watches in awe.