Zelda Wiki
Register
Don't have an account?
Sign In
Advertisement
in: Breath of the Wild Pages with Invalid or Missing Terms, Champions, Hyrulean Champions,
and 11 more 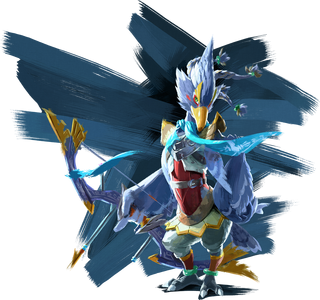 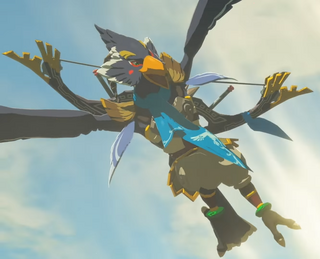 Revali is a recurring character in The Legend of Zelda series.[8][name reference needed]

Revali is known for his arrogant, sardonic outward personality, which is especially apparent when around Link. He is often boastful about his capabilities and is often unwilling to admit defeat when he gets bested by an opponent, claiming he wasn’t trying his best such as when he was defeated by Windblight Ganon, where he claimed he was “only winging it”. His resentment towards Link is due to envy of his higher position as well as his lack of expression rubbing him the wrong way.[9][10][11]

In the Champion Revali's Song cutscene, EX Recovered Memory, it is revealed that Revali's abrasive and reserved persona is frequently used to cope with his insecurities. He berates himself after a failed attempt at mastering his signature move, and calls Zelda out for witnessing his vulnerable side before putting his smug and confident barriers back up.

100 years prior to the events of Breath of the Wild, Revali was the Champion of the Rito tribe. He was known as the most skilled archer of all the Rito and could fire Arrows with the speed of a gale.[12] Revali has the ability to create an impressive updraft that allows him to soar, later named Revali's Gale after him.[1] His weapon was the Great Eagle Bow.[12]

Revali was present during the ritual of Princess Zelda making Link her appointed knight in Link's first Recovered Memory. After Daruk commented on the depressing delivery of Zelda's speech,[13] Revali reminds Daruk that the "ceremonial pomp, grandeur, and nonsense" was his idea in the first place.[14] Revali then states his disapproval of Link until Urbosa tells him to stop.[15]

Later on, in Link's second Recovered Memory, Link visits Rito Village. Revali confronts Link and openly admits that despite wanting to stop Ganon, he does not like the idea of merely assisting Link just because he wields the Master Sword.[16] Revali believes he is more skilled than the young hero.[17] After gloating about how his abilities are superior, Revali suggests they compete one on one atop the Divine Beast Vah Medoh.[18] Revali then mocks Link for not even being able to make it there on his own and soars upward to Medoh.[19]

Unlike the other 3 Champions, Revali does not have any known relatives or descendants. He was succeeded by Teba as the protector of Rito Village.

After Link's victory over Windblight Ganon, Revali is freed and gains a grudging respect for the hero.[26] He thanks and congratulates Link on succeeding where he has failed and acknowledges Link as a warrior worthy of Revali's Gale.[27] After Link leaves, Revali flies Medoh, landing on top of the giant stone perch above Rito Village. He sets Medoh's sights on Hyrule Castle.[28]

After Calamity Ganon is defeated for good, Revali's spirit perches atop of Hyrule Castle with his fellow Champions and King Rhoam, bidding farewell to Link and Zelda before departing for the afterlife.

In Hyrule Warriors: Age of Calamity, Revali first attacks Zelda and Link after mistaking Terrako as Harbinger Ganon, the one that had brought a horde of monsters to attack Rito Village. Link and Revali start to fight, but Zelda stops them just before they are about to kill each other. After this battle, Revali seems to consider Link as his rival. He behaves quite derisively toward the other champions save for Mipha, whom he genuinely seems to respect, though Mipha dislikes his harsh treatment of Link.