Large Ears that allow them to fly

"During the day they are quite docile, but after dark their personality turns aggressive and they will attack. Don't be fooled by their cute appearance."
— Fi

Remlits are a race from The Legend of Zelda: Skyward Sword. They are cat-like creatures kept as pets by the inhabitants of Skyloft. During the day, Remlits are friendly and docile; however, at night they transform into vicious, demonic creatures that will attack Link on sight. Remlits are capable of both swimming and flight, the latter of which is performed by flapping their large ears to remain airborne. If picked up and thrown, a Remlit will always land on its feet; if thrown off the edge of Skyloft, it will fly back to safety. Remlits generally appear in the same area in both their day and night forms, albeit in slightly different positions. Remlits will also avoid Bombs that are about to explode from Link's Bomb Bag.

Gaepora is the owner of Mia, the only named Remlit. Throughout the game, Horwell is looking after her. During the day, Mia and Horwell are in his office, surrounded by various cat towers, toys, and even a litter box. This is the only time a Remlit can be found inside. During the night, Horwell is in his office, with Mia absent. A group of five Remlits can be seen near the Statue of the Goddess in Skyloft. They can be viewed using the Beetle, but they can only be visited after Link obtains the Clawshot. They are absent during the night, however. There is no known reason for this, but if Link plays the Goddess's Harp for them, they will sing along to Link's strumming. Once Batreaux turns into a human, the curse placed on Skyloft is lifted, stopping Remlits from transforming at night.

At night, Link can keep hostile Remlits at bay by using a Shield Bash to stun them when they lunge, or by slashing them repeatedly with his sword, causing them to run away and cower. During the day, if Link draws one of several items, Remlits will run away, and if struck they will cower. Remlits are invincible, and can never be defeated as one would an enemy, regardless of their current form. They can also be stunned by Glittering Spores, Humorously, Glittering Spores can be used to stun Remlits during the day such as Mia inside the Knights Academy, causing her to cower and struggle when picked up just like Remlits do at night, however her docile daytime appearance of her face will remain though her tail will be frizzled like nighttime Remlits.

Link can pick up and carry around Remlits, to which they don't mind unless they are scared after being struck or at any time during the night. During the day they will cautiously flee a short distance away from Link if he has his sword and shield out.

Nighttime Remlits can only be picked up after being struck with the sword enough times for them to cower, to which they lash out at Link, attempting to claw at him. Despite this, they cannot hurt Link while being held. During the day, all Remlits start out asleep in their "spots" where they are found every day. When Link approaches them, they will wake up and stretch. After this, they will look at Link and follow him around until Link goes to far away from them. Every once in a while, awake Remlits will meow like cats. Every time Link throws one off the edge of Skyloft, it will fly right back to it's "spot", where it will then fall back asleep until Link comes again.

There are eight known Remlits in Skyloft, Mia, Five that reside near the Statue of the Goddess, one on the bridge across the river, and one in some flowers near the waterfall. During the night, Remlits will appear in places where there are none during the day. Since Mia is sent outside and the five Remlits near the statue of the goddess are missing during the night, these added Remlits could be the absent ones. As such, one appears on the Bazaar side of the bridge housing the other Remlit during the night.

Humorously, if Link picks up a Remlit at night (after making it cower) and walks by Pipit's House at night after completing Mallara's house cleaning side-quest, he will continue to hold it while listening on Pipit as he berates his mother for spending the Rupees he gave her frivolously, only to drop Remlit when Pipit comes outside causing it to attack Link while he's talking to Pipit before scampering off.

The name Remlit may be a reference to the titular characters from the film Gremlins, somewhat similar-looking creatures who transform into monsters under certain conditions. 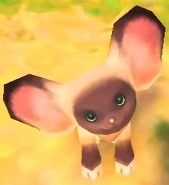 A Remlit during the day

A Remlit at night
Add a photo to this gallery

Retrieved from "https://zelda.fandom.com/wiki/Remlit?oldid=539292"
Community content is available under CC-BY-SA unless otherwise noted.