Zelda Wiki
Register
Don't have an account?
Sign In
Advertisement
in: Shops, Locations, Locations in The Minish Cap 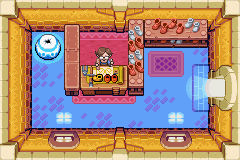 The interior of Rem's Shoe Store

Located in Hyrule Town, Rem's Shoe Store is owned by Rem, a shoe-maker that is always falling asleep on his job.[3] Due to this, the Minish are usually the ones that make shoes while Rem is asleep, making him think that he works while he sleeps.[4][5][6]

Since Link cannot get across Castor Wilds without the Pegasus Boots, he must visit Rem's Shoe Store and ask Rem to make a pair for him. The Minish mention that they just finished making a pair of Pegasus Boots, but since Rem is the only one who can put the finishing touches on the shoes, Link must find a way to wake him up.[5][7] As such, the Minish tell him where to find the Wake-Up Mushroom, located in Syrup the Witch's Hut deep in the Minish Woods.[8][9][10] Once Link obtains the Wake-Up Mushroom and uses it in front of Rem, the shoe-maker thanks him for waking him by giving Link the Pegasus Boots for free.[11]

One of the three Minish on Rem's desk will recognize Link as the one who brought the Picori Blade to Melari and states that he would like to go on a quest, but laments that he must make shoes for Rem.[12]