Zelda Wiki
Register
Don't have an account?
Sign In
Advertisement
in: Items, Items in A Link to the Past, Items in Link's Awakening DX,
and 3 more 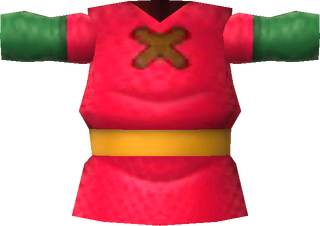 The Red Mail is the third and best armor Link can wear in A Link to the Past. It is found in Ganon's Tower in the Dark World. When this tunic is worn, it reduces damage taken by half over the Blue Mail.[3] Additionally, it turns Link's cap purple.

In Link's Awakening DX, the Red Clothes double the damage of Link's Sword attacks and sends enemies flying when he hits them,[1] acting like a permanent Piece of Power, except that his walking speed remains the same. They are accessible only after completing the special Color Dungeon hidden in the Graveyard, where the Fairy Queen will allow Link to choose between the Blue or Red Clothes. Once he selects one of the special tunics, he can switch to the other by speaking to the Fairy Queen again.

The Red Mail in A Link Between Worlds is typically found in a Big Chest hidden on the fourth floor of Lorule Castle. By extinguishing the torches in the area, an invisible platform leading to the chest will be illuminated. If Link has not yet obtained the Blue Mail, it will instead be in this chest; the Red Mail can then be found in the Swamp Palace. Wearing the Red Mail will reduce the damage Link takes by a further half over the Blue Mail's defense.[4]