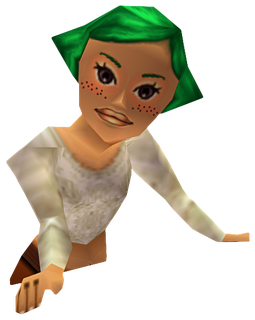 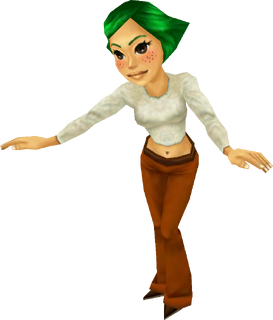 The Receptionist is a character in Majora's Mask.[1]

The young lady serves as Mayor Dotour's secretary at his residence. She is responsible for directing people either to the Mayor's office or his wife's drawing room. She will ask Link if he has any business with the Mayor or his wife,[2] and gives him directions to both of them when Link speaks to her. She explains that the Mayor is in the middle of a meeting (or that it just ended if Link has helped the Mayor do so).[3][4] She will also warn Link not to enter Madame Aroma's drawing room without an appointment else she will get mad.[5] If Link speaks to her a second time, she will ask if he wants to hear her directions again.[6] Apparently quite a few people come to her asking about Kafei. She seems to think that the Mayor's son intentionally broke his engagement with Anju and that people should let him do what he wants.[7] During the Final Day, she will flee from Clock Town like most of the residents.