Zelda Wiki
Register
Don't have an account?
Sign In
Advertisement
in: Bosses, Bosses in The Adventure of Link
English 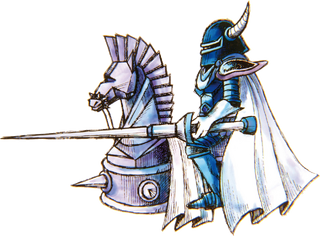 Rebonack is the Boss of the Island Palace in The Adventure of Link.[1][note 1] He is a powerful blue Iron Knuckle mounted on a floating mechanical horse and wielding a jousting lance. Two others are later encountered in the Three-Eye Rock Palace as mini-bosses.

While mounted on his horse, Rebonack retreats off or almost off screen, then charges at Link at high speed. Seemingly on the back foot against a mounted opponent, Link must move to the middle of the room and when Rebonack charges, jump and use the Down Thrust to damage him.

After he has suffered enough damage, his horse will run away, Rebonack leave his lance, draws his sword and will fight Link on foot as a standard Blue Iron Knuckle by shooting Sword Beams (referred to as knives in the NES Game Atlas).[4] However, Rebonack are much better defenders than other Iron Knuckles. Rebonack can also go off-screen, where Link cannot follow him, and continue shooting Sword Beams. During the second phase, it is best to continuously bait him to the middle of the room.

Rebonack appears in two episodes of Captain N: The Game Master, however he is referred to as Iron Knuckle in the series. He is first shown in "Quest for the Potion of Power" after Link, Princess Zelda, and Kevin arrive to the chamber of the Potion of Power in Island Palace, where Iron Knuckle reveals himself to be the guardian of the potion.[5] Iron Knuckle rides an armored horse, but it does not float, instead moving about on four legs. Link and Kevin argue as to how they should go about defeating him,[6][7] and before they even manage to inflict damage upon the armored foe, Princess Zelda is taken by Iron Knuckle and Link realizes that he must fight alongside Kevin to be able to defeat it.[8] Together, Link and Kevin fire at Iron Knuckle, causing its horse to disappear and giving Zelda a chance to free herself. The three heroes then shoot at him one more time to finally defeat it.

In "Having a Ball", another Rebonack/Iron Knuckle confronts Link, Princess Zelda, Kevin, and Princess Lana while they are exiting the tunnel that leads to the Island Palace. Kevin tries to shoot it with his Zapper but it has no effect, so the group jumps out of the way and allows Iron Knuckle to charge past them and fall into a nearby lake where it sinks along with its horse.

Rebonack from The Adventure of Link appears in the "Missing in Action" story of The Legend of Zelda comics by Valiant Comics, although, like in Captain N: The Game Master he is referred to as Iron Knuckle. Like in the game, he is the guardian of the Recorder in the Island Palace. When Link and Zelda arrive to the palace in search of the Recorder, they are confronted by Iron Knuckle.[9] After a grueling battle, Link defeats his foe, knocking its helmet off. It turns out that it is a human, and not a monster under the armor. The man explains that an old king charged him with protecting the treasures within the palace,[10] and that he was to stop anyone who was unworthy.[11] He tells the duo that by defeating him, they are free to take what they want, and he shows them a secret wall that contains the magic flute.[12]