This article refers to the Bombchu enemy. For the item, see Bombchu. 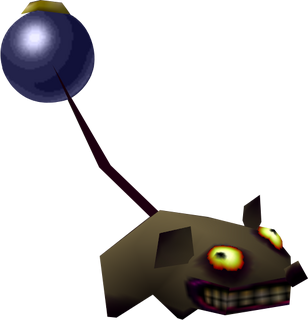 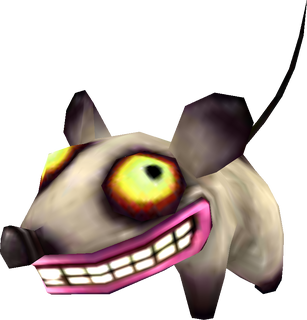 Bow
Real Bombchu are recurring Enemies in The Legend of Zelda series.[1] They are named after the Bombchu, a type of Bomb.

In Majora's Mask, Real Bombchu are a living version of the Bombchu Bomb. In-universe, they may be the source of inspiration for the mechanical Bombchu. These creatures run around with Bombs hanging from their tails, waiting to blow themselves up in order to damage their enemies. They can run across water. If they sight Link, they will run after him and explode either upon contact or after a short while.

An Arrow from the Hero's Bow will make the Real Bombchus explode; however, if Link uses the Hookshot, the Real Bombchu will just be reeled in towards him and explode upon contact. In addition, if Link raises his Shield when facing a Real Bombchu, it will bounce off and fall backwards, then explode. Like most enemies, Real Bombchu cannot hurt Link if he is on Epona. Wearing the Stone Mask will cause them to completely ignore Link.

In The Wind Waker, Bombchus are simply Rats holding Bombs. Their main habitat is the Forsaken Fortress, but they can also be found in a submarine near Headstone Island. The Real Bombchu can be seen emerging from Rat holes, which they will leave to throw a Bomb at Link and then quickly retreat to get another Bomb.

In Four Swords Adventures, Bombchus appear in the Temple of Ice and the Tower of Winds stages. They swarm the room, exploding upon impact with any of the Links. They spawn from holes in the ground and will only stop appearing when the holes are closed upon activating a switch.