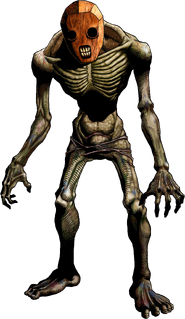 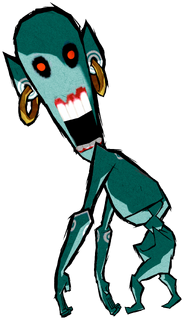 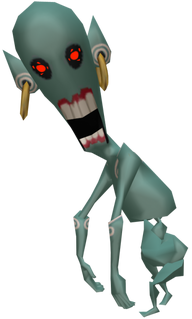 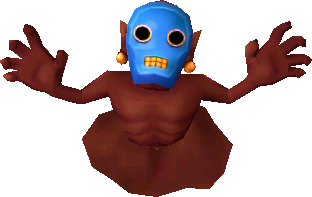 Ocarina of Time
8
The Wind Waker
10

ReDeads,(OoT | TWW | TFH)[1][name reference needed] also known as the Lurkers in the Dark,(OoT)[name reference needed] are recurring Enemies in The Legend of Zelda series. They are tall, zombie-like monsters. While their appearance changes from game to game, their behavior has remained relatively the same - namely their tactic of staying in place and using a petrifying gaze to freeze nearby intruders in their tracks. While their prey is stunned, they will walk over and attack.

ReDeads share many similarities with Gibdos, which also behave identically in the 3D console games. Some versions of Gibdo will become a ReDead if their bandages are burned off.

In Ocarina of Time, ReDeads are brown and wear wooden masks. They usually appear in small groups or sometimes alone in dead or ruinous places, such as tombs or dungeons, and make their presence known with periodic, low-pitched moans. ReDeads are encountered the earliest inside the Royal Family's Tomb, where they gather in a chamber leading to the room where Link learns the Sun's Song. They can later be found in Castle Town's ruined market place, presumbly as the town's deceased residents, and at the Bottom of the Well and inside the Shadow Temple.

ReDeads can either be found idly standing slightly hunched over or sitting crouched down in the fetal position, until Link approaches, at which they will rise and slowly shuffle towards him. When Link is within their range, they will paralyze him with a bone-chilling gaze, jump onto his back if close enough, and gradually drain his health by squeezing and biting him. Link will then have to struggle free with a series of A and B-Button presses. Once released from their hold, Link can either strike back with the Sword or run away to attack from a safer distance. ReDeads, however, have a flaw in that they are blind. Link can walk by slowly or with the Iron Boots equipped to pass by unnoticed. If Link takes out or puts away any weapon, or runs near them, they will hear him and attempt to paralyze him with their vivid gaze. Interestingly, Link cannot become paralyzed in areas with a fixed camera position, namely Castle Town's market, possibly because of the way the camera usually zooms in when the monsters use their gaze attack.

ReDeads are quite slow, both in motion and recovering from an attack, making them fairly easy to slay, particularly if Link can get behind them. When a ReDead is slain, any other ReDeads in the area will walk towards and crouch beside the fallen ReDead until its body fades away, ignoring Link and making killing the whole group easier. This behavior is never explained in the game, although plausible explanations could be that they are mourning its death or even consuming its corpse.

ReDeads in Ocarina of Time are quite susceptible to the Sun's Song, which will paralyze them for a short while when played. They are also weak to fire-based attacks, such as Din's Fire or the Fire Arrows.

In Majora's Mask, ReDeads appear mostly the same as in Ocarina of Time, although with several differences, particularly in their behavior and weaknesses. While ReDeads will continue to utilize a paralyzing gaze and slowly approach Link when he comes close, if Link wears the Garo's Mask, Gibdo Mask, or the Captain's Hat, the ReDeads will inexplicably dance and ignore him. A Gossip Stone offers a possible explanation of this peculiarity by stating that the ReDeads of Ikana Castle were once a troupe of performers.[2] While wearing any one of these masks, Link can freely attack the ReDeads with ease, so long as he keeps the mask on.

ReDeads in Majora's Mask are weak to beams of light reflected off of the Mirror Shield, which will kill them instantly. They also retain their weakness to fire, and can be defeated with the Fire Arrows.

Gibdos can have their bandages burned away to reveal a ReDead underneath.

In The Wind Waker, ReDeads appear significantly different as turquoise, skeletal beings with earrings. They mainly appear in the Earth Temple, as well as in the Ghost Ship, the Savage Labyrinth, Ganon's Tower, and unusually in the sewer tunnels of the Private Oasis.[3] Their method of attack is the same as their earlier incarnations, often hiding in coffins and leaping out when Link gets too close. Instead of draining his life, they will bite down and deal only one Heart-worth of damage before releasing him, but will quickly try to attack again. Unlike those of Ocarina of Time and Majora's Mask, these ReDeads do not appear to be blind, as they will look up at Link whenever he moves close to them; in fact, while their eyes are initially black and lifeless, they glow red to signify their gaze attack and advance upon their target. They cannot be fooled by walking slowly, and will always attack once Link comes within range.

As in Majora's Mask, they are weak to light, however this will not kill them but briefly stun them. Link can use the Mirror Shield to reflect light onto them, allowing him to quickly attack before they become mobile again.

In Tri Force Heroes, ReDeads[4] appear in the Lone Labyrinth and Grim Temple of The Ruins. They appear and behave slightly differently from their past incarnations, as their clay-like bodies are partially melted to the ground, which somewhat resembles Dead Hand, but become fully bodied when stunned. They also wear bright, blue masks. They are able to dissolve their bodies into a puddle to quickly move around the area. When one of the Links draws near, they emit a petrifying cry, which travels in a shock wave radius. Any of the Links caught in this shock wave will become petrified to the ReDead's scream. The monster will then approach the nearest Link and proceed to grab and repeatedly bite him, which will drain the Links' shared health. The other Links can come to their teammate's rescue by attacking the ReDead, which will free the trapped Link.

Under most circumstances, ReDeads can only be attacked once they are stunned by an item, such as the Gust Jar or the Gripshot. This allows the Links to attack them during this brief period. They can also be attacked from afar with the Fire Gloves.

In Super Smash Bros. Melee, ReDeads appear as enemies in the Underground Maze and randomly from Crates. They can latch onto fighters and damage them while increasing their percentage. They can be knocked out, netting 800 points from the ReDead KO bonus. According to their Trophy in Super Smash Bros. Melee, ReDeads from Ocarina of Time are not actually undead people, but ghastly forms created by magic.[5]

In Super Smash Bros. Brawl, ReDeads appear as a Sticker.

In Super Smash Bros. for Nintendo 3DS / Wii U, they again appear as a Trophy, describing them as monsters seemingly made of clay.[6] In the Nintendo 3DS version of the game, ReDeads also appear as enemies in Smash Run.

In Super Smash Bros. Ultimate, ReDead appears as a Spirit with the ability, Jump 🠇, which lowers a Fighters jump height.