Zelda Wiki
Register
Don't have an account?
Sign In
Advertisement
in: Locations in The Adventure of Link, Towns, Locations 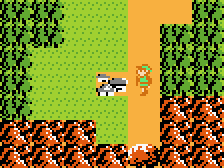 Shield Magic
Rauru Town,(TAoL | CN)[1][2] also simply known as Rauru,(TAoL)[3][4] is a recurring location in The Legend of Zelda series.

The town is close to the North Castle and is found beyond the forest to the southeast. It's the first town that Link is likely to visit in his quest.

The Shield magic can be earned here by speaking to one of the women in town. She wishes for Link to talk to her father before leaving to his next destination.[5] Upon entering her house, an Old Man will be waiting at the end of the basement to teach the young hero his first spell, which will prove useful to Link when he journeys through the Parapa Desert north of Rauru.[6]

The town of Rauru appears in the "Quest for the Potion of Power" episode of Captain N: The Game Master. The episode starts with the citizens enjoying a beautiful day until Moblins appear and cause the townsfolk to go into hiding. It is later revealed by Princess Zelda that the Moblins are trying to revive Ganon using a special potion found somewhere in Rauru Town, and they ask help from Captain N, also known as Kevin, so that they may find it first before it falls into the wrong hands.[7]

When the heroes arrive to Rauru, they find it practically deserted, until they see a woman walk by not far from where they are. They ask her for help in finding the potion, but the woman nervously exclaims that she knows nothing and runs away.[8] A few seconds later, however, they hear her scream and find that a Moblin is also interrogating the woman about the potion.[9] After Link, Zelda and Kevin defeat all of the Moblins, Link approaches the Moblin leader to defeat him, but the woman's son gets in the way and the Moblin leader holds him hostage, commanding the heroes that they drop their weapons.[10] Link and Zelda obey, but Kevin hesitates to drop his Zapper until the Moblin singles him out, at which point Kevin throws it in front of him. As the Moblin is distracted, Kevin throws a blanket on top of the monster, allowing the kid to escape and giving Link a chance to zap the Moblin. The woman thanks Kevin for saving her son and gives him a map to the Parapa Palace, where they will find the Golden Key that reveals the path to the Potion of Power.[11]