For the town in The Adventure of Link, see Rauru Town. 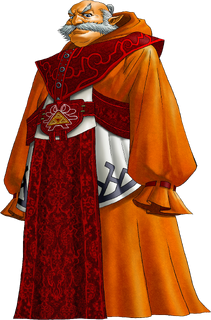 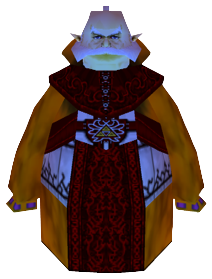 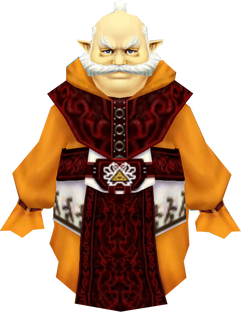 Rauru,[1] also known as Kaepora Gaebora when in his owl form, is an ancient Hylian and the Sage of Light in Ocarina of Time. Many ages before the events of Ocarina of Time, he constructed a new, second Temple of Time over the former location of the Sealed Temple during the Era of Chaos, a chaotic period that followed many years after the events of Skyward Sword. He did so to protect the Triforce from the onslaught of greed, with the Temple of Light, situated at the center of the Sacred Realm, becoming its resting place and the Temple of Time acting as its only, locked entrance. Rauru then remained in the Temple of Light and protected the sacred relic for many years.[2]

During the events of Ocarina of Time, Rauru is not seen outside of the Sacred Realm except in his owl form as Kaepora Gaebora. He helps and watches over Link, the Hero of Time, many times throughout his quest, anonymously in his owl form when Link is a child and in his Hylian form when he is an adult. The connection between his Hylian and owl forms remains ambiguous to the public, being a mere rumor from a Gossip Stone.

The Era of Chaos

Long ago, during the Era of Chaos and shortly before the Kingdom of Hyrule was established by the royal descendants of the goddess Hylia's mortal incarnation, Rauru built the Temple of Time over the remains of the Sealed Temple that was located deep within the Faron Woods in the Faron Province. In doing this, he protected the sacred relic of the Golden Goddesses, the Triforce, from the lustful and chaotic wars being fought over its ownership at the time.[3][4] Rauru named the Temple after the Temple of Time from the legends of the events of Skyward Sword about a Hero who had wielded the Master Sword and traveled between two time periods.[5][6] He chose to remain within the Temple of Light, situated in the center of the Sacred Realm, only leaving it in the form of the wise and watchful owl known as Kaepora Gaebora. Knowledge of the Sacred Realm passed onto the Sheikah and Rauru's name faded into obscurity.[7]

After a young Link defeats Gohma in a failed attempt to save the Great Deku Tree, he leaves the Kokiri Forest and has his first encounter with Rauru, who awaits him in his owl form as Kaepora Gaebora at the edge of the woods. The owl gives him encouragement on the adventure the Great Deku Tree has tasked him with and advises him to visit Princess Zelda at Hyrule Castle before leaving with a promise that they will meet again.[8]

True to his word, Kaepora Gaebora often appears to tell Link about a new area whenever the young hero comes upon it, and he picks Link up and carries him twice when Link could not progress on his own. Once Link reaches the Spirit Temple, after navigating between the eras of his childhood and adulthood, Kaepora Gaebora compliments him on his growth and bids farewell after giving one final piece of advice on how to defeat the witches, Twinrova.[9]

When Link drew the Master Sword from the Pedestal of Time, Ganondorf entered the Sacred Realm and obtained the Triforce of Power from the Temple of Light. The Sacred Realm transformed into the Evil Realm, with the exception of the Chamber of Sages. [10] [11] [12] [13] The Master Sword kept Link in the safety of this chamber so that the boy could grow old enough to truly assume the role of the Hero of Time.[14] Rauru speaks with Link for the first time after a period of seven years, informing him of what has transpired and his duties as the Hero.[15][16] After instructing him to awaken the other Sages, Rauru gives him the Light Medallion.[17][18]

Rauru contacts Link again after he frees the other five Sages. He tells Link to meet "someone" waiting at the Temple of Time before facing Ganondorf.[19] This person turns out to be Sheik, who reveals herself as none other than Princess Zelda, the seventh Sage.[20][21] Unfortunately, by revealing herself to Link, Zelda exposes herself to Ganondorf, who subsequently captures her and takes her to his Castle.[22][23][24] Rauru then instructs Link to save Zelda and informs him that he and the other Sages will aid him by providing entrance to Ganon's Castle.[25] When Link defeats Ganon, Rauru leads the other Sages when they use their powers to seal Ganondorf within the Sacred Realm.[26]

Rauru, like the other Sages who helped seal Ganondorf within the Sacred Realm, is memorialized within one of the stained glass windows in Hyrule Castle's basement, where the Master Sword is now enshrined. The Royal Crest is depicted directly above him. His appearance in the stained glass window is one of several examples of how famous the events of Ocarina of Time became in the history of Hyrule.