It has been suggested that this article be moved to Rapid Ride. 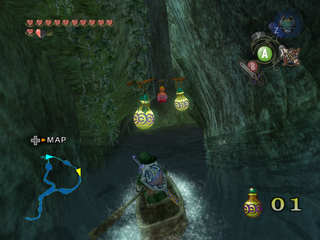 Link going down the Rapid Ride from
Twilight Princess

Zora's River
Raft Shop
Rapids Ride is a recurring location in The Legend of Zelda series.[1][note 1] It usually refers to a location with river rapids in which Link can ride in a raft or a canoe, usually as part of a mini-game.

In Link's Awakening, Rapids Ride is a region located in the eastern part of Koholint Island. For a fee of 100 Rupees, Link can travel on a raft down a series of high-current rapids and waterfalls. As he is riding down the rapids, the young hero can also obtain items floating above the water, such as Rupees, Arrows and Bombs, by leaping with the Roc's Feather to catch them. The rapids also serves as a shortcut going down from the northeastern to the southeastern parts of the island.

One of the islands within the Rapids Ride area can only be accessed via a staircase in Face Shrine. On this island is a Treasure Chest containing a Secret Seashell.

In Twilight Princess, Iza's Rapid Ride, or simply Rapid Ride,[3] is located in Upper Zora's River in the Lanayru Province and runs all the way down to Lake Hylia. The mini-game is run by Iza and her Zora friend.

At first, the mini-game is not available since a rockfall dammed up the river.[4] As such, if Link speaks to Iza, she will simply ignore him. To get the mini-game to open, Link must defeat the Shadow Beasts that appear around the Fishing Hole. After they are defeated, Iza becomes impressed by Link's bravery and lets him into the Boat Rental Cabin. She will request that Link help her out by clearing a path downstream. If he agrees to clear the debris that has clogged the river flow, Iza will lend Link a Bomb Bag and fill up his Quiver with Arrows.[5] By shooting the rocks that are visible from the Cabin's interior with Bomb Arrows, Link will be able to row down the rapids and clear the rest of the rocks that are blocking the water flow. Once Link reaches Lake Hylia, Iza's Zora assistant will allow him to keep the Bomb Bag.[6]

Link can return to the Boat Rental Cabin at any time after clearing the river to play Iza's mini-game for 20 Rupees. This time, Link has to smash pots using Bomb Arrows. Yellow pots are worth one point, while red ones are worth two points. However, if Link bumps into anything on his canoe, he will lose one point.[7] If Link scores at least 25 points by the time he reaches Lake Hylia, Iza's assistant will reward him by doubling his Bomb-carrying capacity in all of his Bomb Bags.

The Rapid Ride appears in Link's Crossbow Training. Stage 2 places Link inside of a canoe and travels downstream the river. Toadpolis and Tektites are the only enemies in the stage, while the pots of Iza's Rapid Ride can be shot for points. The rocks Toadpolis spit at Link can be hit for points, as well as the hidden orange Rupees, Fairies and Scarecrows.