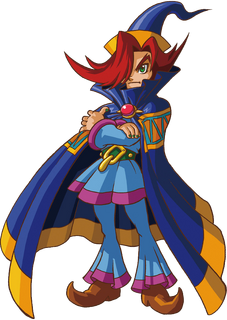 Ralph is character in Oracle of Ages.[3] He is Nayru's childhood friend and loyal guardian.[4] Although he is stubborn and hotheaded, rarely pondering the consequences of his own actions, he is a noble character deep down. Due to his protective nature defensive attitude towards Nayru, Ralph expresses a certain resentment towards Link, treating him with a certain amount of rivalry throughout the course of the game as he attempts to rescue Nayru before Link.[5] As Link defeats Veran and saves Nayru from Queen Ambi, the young hero gains Ralph's respect.[6]

Ralph is first seen standing next to Nayru when Link first arrives to Labrynna. He confidently informs Link that he will not be needed to help protect Nayru,[7] only seconds before Veran possesses her. Standing up to Veran, Ralph threatens to cut her in half if she does not release Nayru,[8] but is forced to stand down, as Veran points out that if he attacks, Nayru will die.[9] Making her getaway to the past, Ralph is quick to pursue her through the still-open Time Portal.[10]

Despite his noble ambition, Ralph is ultimately of little help, as he simply runs around in the past hoping to encounter Veran. He does, however, point out a few important facts to Link as the young hero quests for the Essences of Time.[11][12][13][14]

After Link completes the Mermaid's Cave, Queen Ambi leaves her palace, giving Link the ideal opportunity to rescue Nayru from Veran's clutches.[15] Upon his arrival to the palace, Link runs into Ralph, who also heard that the palace guard was let down.[16] Ralph rushes ahead to find Nayru, but not before informing Link of a hidden entrance to the palace interior within the palace garden.[17] Ralph reappears after Link saves Nayru from Veran, who then possesses Queen Ambi. Saving both Link and Ralph, Nayru returns them to the present.

After Nayru's safe return, Ralph apologizes to Link for his behavior.[18] He decides to return to the past, vowing to defeat Veran.[19] Ralph is determined to kill Queen Ambi to save Labrynna and Nayru, even after it is discovered that the queen is Ralph's ancestor.[20] Ralph does not understand that he will fail for sure, because the fact that he was born means that his ancestor Ambi was not killed in the first place, though he does suspect he'll cease to exist if he succeeded.[21][22] As expected, when he comes face-to-face with the Sorceress of Shadows at the Black Tower, he is easily thwarted by Veran's power.

Ralph survives (thanks to Veran's "kindness"), but Veran mocks both Link and Ralph, saying that by killing the queen, Ralph in turn will vanish,[23] although the existence of Ralph proves that the queen will not be harmed. During the ensuing battle, Link frees Ambi from Veran's control and then defeats the sorceress. Believing that the danger is over, everybody attempts to exit the tower. However, Veran is not finished. Link, separated from Nayru and Ralph, faces off against Veran for the last time. After defeating Veran for good, Link meets with Nayru and Ralph, accompanied by Queen Ambi and her soldiers. Ralph is amazed by Link's performance,[24] and from then on treats the young hero with the utmost respect.[6]

As the adventure ends, Ralph vows to train harder to be able to protect Nayru on his own.[25] He is last seen training with Link, trying unsuccessfully to master the Spin Attack, turning it into an uncontrollable version with greater range. Despite the greater range of damage, the attack makes Ralph too dizzy to do anything except collapse after he uses it.

Ralph has changed some in his manga appearance. He is used for greater comic relief than in the game, and is also much stronger, accompanying Link throughout the majority of his journey. Unlike in the games, Ralph is, at one point, possessed by Veran.

Ralph makes his first appearance after Veran possesses Nayru and travels to the past. When he learns of Nayru's fate, he falls into an emotional rage, blaming Link for the event and accusing him of trying to seduce Nayru.[26] Although, when Impa wakes from unconsciousness, she explains what happened to Ralph. He then exclaims that he is going to save Nayru, and attempts to take the Harp of Ages from Link, resulting in the two fighting over it.[27] Ralph accidentally strums the harp and Link goes back in time without him.[28]

Ralph isn't seen again until chapter six. Once the Harp of Ages has been passed down through time into the present because of Link dropping it during his capture, Ralph seizes it from a Tokay's shop and heads to Labrynna's past. When he arrives, he falls on top of Link, who is currently battling a Nayru possessed by Veran. Ralph is at first excited to see his childhood friend,[29] until the possessed oracle attacks them. Link explains that Nayru is still under Veran's influence.[30] He begins to form a plan to defeat Veran, but because the Harp of Ages is again accidentally strummed, the two are teleported onto an island.[31]

Link questions Ralph about any weaknesses Nayru may have, but he replies that his flawless friend has none.[32] He then becomes angry at Link once more, this time for teleporting them to a deserted island.[33] Eventually Ralph and Link are caught in a storm,[34] whereas Link learns of Ralph's nobility from his inability to row the raft.[35][36] The duo see a ship in the distance and call for help.[37][38] Both are welcomed on board, only to discover to their horror that they are on a ship with skeletons for crew.[39] Link asks the ship's Cap'n about Veran and learns he may know of her weak spots.[40][41] However, he will only reveal the information if Link and Ralph answer his own questions.[42] After examining Link's sword, the pirate spots the Harp of Ages and commands Ralph to play it for him.[43] To their surprise, the harp doesn't transport them anywhere.[44] Ralph begins to play with remarkable skill, causing Link to compliment him.[45] Ralph answers that it's because of his refined skill.[46] However, it is unknown whether Ralph can truly play or if the Harp of Ages was using its power, since he expressed surprise at his own skill. Link reads the ship's log and realizes the Captain and his crew have been stuck in the storm for forever.[47] Ralph and Link attempt to leave to avoid having the same fate but are blocked by the pirates.[48][49] As the Piratians attack, Ralph says he cannot die now because he has to find Nayru.[50] Link explains that they can fix everything for the crew and the Captain's lady if they leave.[51] Moved by the boy's offer, the Captain gives them a boat and reveals Veran's weakness.[52][53] Ralph voices his concern if the pirates will ever be freed from the storm.[54] Link assures him that they will always keep trying.[55]

The boys arrive back in Labrynna and meet up with Sir Raven. As the three head back to the village, Veran, who was spying on Raven, quickly possesses Ralph. The others are unaware of the strange change in Ralph's personality. Roperi is the only one who notices something wrong with Ralph,[56] but Link brushes her comment off with a laugh.[57] Through Ralph, Veran learns that Raven is Link's ancestor and that he has Mystery Seeds, her fatal weakness. During the night, she uses Ralph to burn the seeds. Just as Link awakens, she leaves Ralph's body, allowing him to explain what happened.[58] Veran leads troops to the hidden village, destroying the homesteads and wounding and capturing Raven. Link, determined to save his ancestor and defeat Veran once and for all, is stopped by Ralph, who claims they will do it together and he will save Nayru.[59]

Just as Sir Raven is about to be executed, Ralph and Link arrive, saving the knight's life. When Link stops a possessed Nayru from spearing Raven, Ralph notices his ancestor, Queen Ambi.[60] The two tell Queen Ambi that the pirate Captain still loves her,[61] causing the queen to cry. The reason she ordered the tower's construction was so the Captain may see it and remember her.[62] She then cancels work on the tower and Sir Raven's execution.[63] Enraged, Veran releases Nayru and possesses Ambi instead, shouting for the guards to seize Ralph, Link, and the others.[64][65]

Nayru awakens just in time to teleport the group back to modern day Labrynna.[66] Ralph asks Nayru if she is all right.[67] Nayru says she is and apologizes for worrying him.[68] Ralph says there is no need to apologize as her safety is important, before bursting into tears and embracing her.[69] Nayru laughs at her guardian, affectionately calling him a "softy".[70] Nayru explains they can find more Mystery Seeds if they return to the past, so they head back.[71] When the group finds Roperi and the other villagers, Nayru reveals that Roperi's plant is a young Mystery Tree.[72] It will take time for the plant to grow even with Nayru's power over time, so Ralph heads alone to the Black Tower, set on destroying Veran.[73] Ralph tells Link to not forget him, since he kind of thought of him as a friend.[74] Alarmed, Nayru explains that if Ralph kills Veran's host Queen Ambi, it will be his end as well.[75]

Ralph confronts a possessed Ambi inside the Black Tower and pulls out a rapier from beneath his cloak. Veran mocks Ralph for his bravery, knowing his connection to Ambi, daring him to kill her.[76][77] Ralph readies himself to end Queen Ambi's life but she flees, calling for the tower's construction to quicken.[78] Meanwhile, Roperi's plant finally sprouts a Mystery Seed, so Link and Raven race to the tower.

Ralph again corners Ambi and prepares to kill her for Nayru's sake, despite the death of his family line that will follow.[79] Just before Ralph's blade pierces Ambi, Link shoots the Mystery Seed at her. Veran is forced out of Ambi. Ralph is mad at Link for saving the day once again when he was prepared to die heroically[80] His anger melts away as Link playfully teases that if Ralph really wants to die he can make it happen.[81] Veran reverts to her true form and attacks the trio. Sir Raven and Link together slay her, yet they're too late. Veran sends a final lamentation of sorrow to Twinrova, lighting the Flame of Sorrow.[82] Link and Sir Raven laugh as Ralph tries to cut himself free from Veran's spider web with his sword.[83] Link offers his to cut Ralph lose.[84] After the Twinrova sacrifice themselves to Ganon he is resurrected.[85] As Ganon smashes the tower, Link, Ralph, and Raven fall, although the Triforce on Link's hand saves them.[86] Ralph and the two knights alongside Queen Ambi's army attack Ganon, eventually defeating the beast. Queen Ambi thanks Sir Raven, Link, and Ralph for their services. She cannot believe how rude her descendant Ralph is after he calls her his great-great-great-grandma.[87][88] Nayru, Ralph, and Link finally return to their own time.

Ralph is last seen with Nayru, Impa, and Princess Zelda at Hyrule Castle having a meal. Zelda compliments him and Nayru on their success.[89] Nayru states that Link was the true hero,[90] although Ralph says he himself is smarter,[91] causing Impa to laugh.