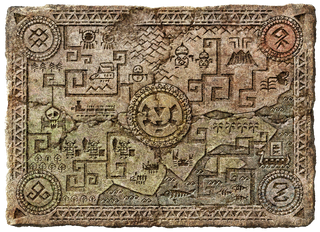 Rail Maps are essential items that are used to restore the Spirit Tracks that have begun to disappear around the four realms of the re-established kingdom of Hyrule.

There are four Rail Maps in total pertaining to the four major realms. All of these maps can be found enshrined in different floors of the Tower of Spirits brought together after defeating the previous dungeon. Link can only travel to other realms after he has retrieved the Rail Map that pertains to said realm. The Rail Maps are:

Link and Princess Zelda are charged with the task of retrieving the four Rail Maps in order to reinstate a portion of the Spirit Tracks that lead to each realm's sanctuary.[3] This causes for the realm's doors to the Tower of Spirits to open, which allows to impart energy to reveal the Spirit Tracks in its respective realm. However, a Rail Map alone is not enough to restore all of the Spirit Tracks since much of its energy has been lost due to the Demon King's power.[4] As such, Link and Zelda must speak to the Lokomos stationed in each realm's sanctuary to restore the Rail Map's energy by playing a special melody called the Lokomo Song. The Lokomo Song is a duet that Link must perform with said Lokomo using the Spirit Flute and another sacred instrument to reestablish the tracks leading to the temple located in the realm that the specific Rail Map belongs to.[5][6] Once Link clears a temple, a Force Gem will be revealed, which will in turn energize the rail map and restore the Spirit Tracks in the realm that connect to the Tower of Spirits, thus returning the once-shattered tower whole once again.

Other than Lokomo Songs, Force Gems can also be used to energize the Rail Map and thus restore more Spirit Tracks.[7] A Force Gem is given to Link when a person feels a great emotion of gratitude, usually when the young hero helps them out. When this occurs, the happiness of said person creates energy, which is in turn transformed into a Force Gem.[8] Most hidden stations throughout Hyrule can only be uncovered with the help of Force Gems, which are necessary to fully complete the Rail Map. Moreover, an item known as the Compass of Light, which can be found beneath the altar, is also needed in order reveal the Spirit Tracks that lead to the Dark Realm: the place where Malladus and Chancellor Cole have escaped to using the Demon Train.[9]