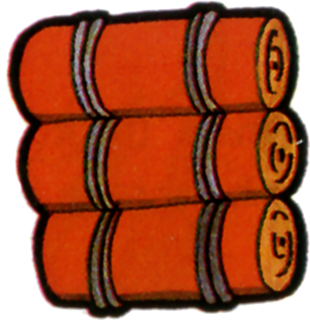 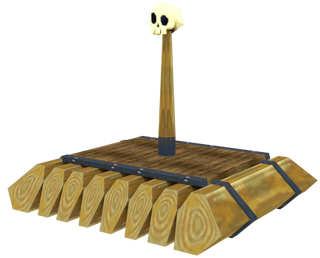 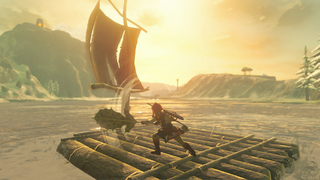 Crossing bodies of water
Rafts are recurring items and objects in The Legend of Zelda series.[1][2][3]

In The Legend of Zelda, the Raft can be found in Level 3. It is used to cross bodies of water such as rivers and lakes. It can only be launched from docks.

In The Adventure of Link, the Raft can be found in the Island Palace. It is used to cross bodies of water such as rivers and lakes. It can only be launched from docks.[4]

In Link's Awakening, Link can ride a Raft during the Rapids Ride minigame.

In Oracle of Ages, if Link gives Rafton the Cheval Rope, he will give Link a Raft that can be used to cross deep water. After Link is washed ashore on Crescent Island, the Raft is destroyed.

In The Wind Waker, Rafts can be found floating around the Great Sea with large masts with skulls on top. Some Rafts are protected by Bokoblins, which may have pots, barrels, and Treasure Chests. Rafts can also be found around islands where Traveling Merchants are found.

In A Link Between Worlds, Rafts appear in the Swamp Palace, Lorule Castle, and the Treasure Hunter Cave found in the Southern Ruins. They can be used to traverse water and lava in conjunction with the Hookshot.

In Tri Force Heroes, Rafts appear in the Cove of Transition and Water Temple levels of the Riverside stage. They can be used to traverse water in conjunction with the Gripshot.

In Breath of the Wild, Link can use Rafts to cross bodies of cold water, such as the River of the Dead, to prevent damage. He must use a Korok Leaf to propel the Raft.

In The Faces of Evil, Rafts appear in several water-based stages, including Spearfish Falls, Firestone Lake, and in the tar pits of Ganon's Lair. They are used to safely cross these waters and will immediately move once Link stands on one.

In Zelda's Adventure, the Raft item can be found next to a pond in the Meadow of Skotness near Great Wimbich. It is used to cross the flooded passage in the Shrine of Water. Another Raft also appears in the Port Town of Seacoast Plain, belonging to a seafarer. He allows Zelda to take the Raft to Sea Island, provided that she pays him two Rupees and has the Vial of Winds, as the offshore wind has died down.[5] The same Raft can be used to return to the Port Town from Sea Island.

In Hyrule Warriors, the Raft appears as an Item Card in Adventure Mode. It can be used to cross water from docks, removing locks on certain adjacent squares. In the Twilight Princess DLC pack, the 8-Bit Power Bracelet can be unlocked in the Twilight Map. It features the Power Bracelet paired with the Raft.